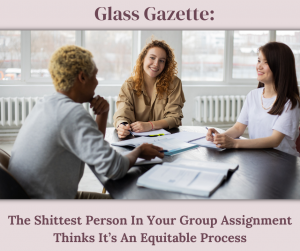 “It’s great that we’ve all really pulled our weight here.”

Queensland University of Technology student Richard Tate has today decided that he is a valuable member of his group assignment team, and thinks he deserves the same grade as his peers.

Tate, who strong-armed his way into an already established group during a tutorial last week, is really excited for his peers to get in contact with him so that he can begin working on his part.

Tate, a Mechanical Engineering student, is enrolled in a business elective as a part of his minor, BSB024, which he says he is excited to begin working on.

‘I just really feel I gel well with this team,’ Tate told the Gazette.

‘I only remember the name of one guy in the group though, so might be a bit hard to do much this week aha.

‘I shot him a message on Facebook a few days ago and he hasn’t replied, so it’s pretty much his fault I haven’t done anything yet.’

Tate says if his group members continue to ignore him, he will be forced to take drastic action and call them out on StalkerSpace 2.1.