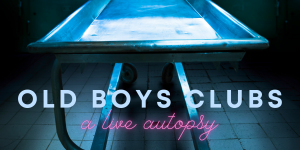 Old Boys clubs. You know them. You probably don’t love them. If you don’t know what I’m talking about, I’m not referring to a wholesome group of neighbourhood kids playing down at the creek. A boys club, essentially, is ‘an informal system of guys bonding with guys that keeps men in positions of power’.

They’re not just a myth. We’ve all seen them – at school, in the workplace, hell – even in Parliament! Greens Senator Larissa Waters commented last year that Parliament was a ‘toxic boys club’, saying ‘those in power are often pale, male, and stale and there are not enough women at the decision-making table.’

Journalists Justine Landis-Hanley (of Shameless fame) and Matilda Mosely (of The Guardian) even ran a podcast about Australian politics titled Old Boys Club. It was all about dismantling the political Old Boys club and making Australian political news accessible to everyone. Alas, the podcast ended last year (I’d recommend checking out their back catalogue though, as well as Landis-Hanley’s new pod, Left Right Out!).

While Boys Clubs might benefit those who are invited to join their cosy coven, they are simultanteously detrimental to the rest of us. Research reported in Forbes last year found that not only are Old Boys’ clubs alive and kicking in workplaces today, but they also contribute to the gender pay gap between men and people of other genders.

Until very recently, Brisbane had its own exclusively pale, male, and stale boys club. Tattersalls Club in Brisbane’s CBD excluded women from its membership for over 150 years. Tattersalls members voted in 2018 for women to be allowed to join the club, only to have a group of its own boys take the decision all the way to the Supreme Court in an attempt to overrule it. If that’s not a classical example of an old boys clubs using their socio-economic and historical privilege to exert control over others, I don’t know what is. It also has toxic written all over it. The Supreme Court threw out the challenge, and women are now allowed to join the $1,100 per year club.

Discrimination is not always a bad thing. Discrimination, in many ways, creates safe spaces and equal opportunities for those often excluded from old boys’ clubs. If this concept upsets you – that your women and non-binary peers should be able to benefit from their own bespoke networks, take a moment to consider how old boys clubs benefit you.

I recently caught up with Kat from the QUT Women’s Collective, and I was struck by how much the work they are doing is focused on dismantling Old Boys clubs through positive discrimination. In the past, you may have seen the Women’s Collective hosting mostly their own events. But this year, there has been a shift. Kat told me that the Women’s Collective have taken a different tack in their advocacy – by directing their resources to directly support ‘Women in X clubs’, referring to the many student organisations on campus who aim to support women and non-binary students in different areas of study. Think Women in Law, Women in Business, etc.

Talking about this change in strategy Kat said, ‘we need more safe and supportive environments for women to not only further develop their skills but also to recognise strengths associated with women such as resilience and patience. We are nowhere near the point of gender equality, so it is very important to have these Women in X groups to identify continuing challenges as well as opportunities that women often come across in their career progress.’

The Old Boys club is not yet dead. There is still work to do. But maybe we all need to take a leaf from the Women’s Collective’s book: if you can’t beat them, make your own damn club. And make it better.

Ciaran (she/her) is a Meanjin/Brisbane-based writer and an editor at Glass Magazine. She is currently studying a Bachelor of Fine Arts (Creative Writing)/Bachelor of Laws.