Hit enter to search or ESC to close
ArticlesFeaturesNewsStudent Rights 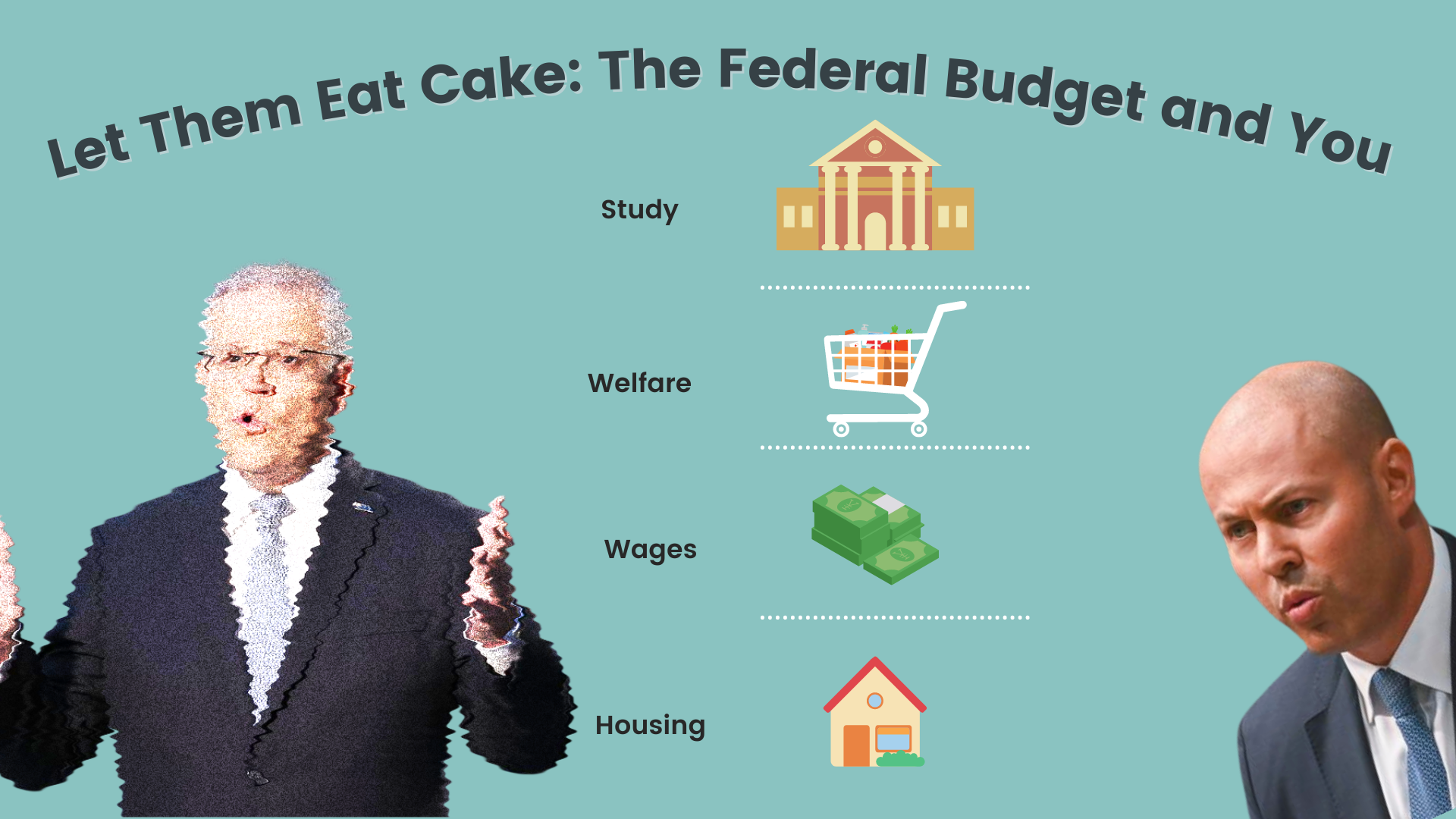 You’ve probably heard that the Federal Budget was laid down last night in Canberra by the Australian Federal Government. You’ve probably also heard a lot about the price of fuel and things like ‘recession’ and ‘surplus’ and ‘economic growth’. But what does any of that mean for you anyway? How exactly does this budget affect you, and how should you feel about that? What did the budget mean for young people?

If you’re a university or TAFE student, there has been no change in the budget for you at all. In fact, you aren’t even mentioned – awesome!

With welfare basically unchanged in the budget, National Union of Students (NUS) President Georgie Beatty took to The Age today to voice her disappointment with the Government.

‘Welfare support for students is woefully insufficient,’ she said.

‘Youth Allowance supports almost 305,000 students and sits at $37.89 per day – well below the $59 poverty line. As if that wasn’t bad enough, the government only recognises young people as independent when they are 22. If you are 19, living out of home and supporting yourself through uni, you don’t even qualify for this meagre payment.

Young people could qualify for a bigger tax return though, as this budget lowered taxes slightly for low-to-middle income earners. This could mean anywhere from $250 to $1,500 depending on your income, although, as Beatty put it, for some people this will barely cover next week’s rent.

Find out how much you could get back here.

If you drive to work or uni and are getting hammered by the record-breaking high fuel prices and the normal, insanely high parking fees, you’re in luck.

In an effort to lower petrol prices, the Federal Government is cutting the fuel excise (a flat tax levied on each litre of fuel) in half. The situation in Ukraine has led to sanctions being placed on Russian oil suppliers, and the overall cost of fuel increasing to over $2.20 a litre in some places.

Australian Treasurer Josh Frydenberg says the cut will last for next six months and will save motorists 22 cents a litre.

No new funding to see here.

However, the Federal Government is investing nearly $50 million a year for five years to support investment in low emissions technologies like hydrogen.

Like getting paid? Fuck you. Real wages are not forecast to grow until later this year at the earliest. This is thanks to a high inflation rate of about 4.25% (the Government predicted about 2.75%).

Instead of offering two separate payments — two weeks of ‘Dad and Partner Pay’ and 18 weeks of ‘Parental Leave Pay’ — the two will now be combined, meaning parents can choose to split the leave between them.

‘It will assist to promote equality between mothers and fathers and empower families to make their own decisions,’ the Government said.

Although billed as an incentive for fathers and partners to take paid parental leave, critics have pointed out that if they actually took more time off it would just be at the expense of the existing paid time off available to mothers.

Scott Morrison said today that the best way for government to support renters is to help them buy a home. We think other alternate options could include: providing more affordable housing, ending negative gearing, restricting home ownership at one’s fifth investment property. But what would we know?

To ease the rental pressure on the Australian market, the Government will expand their first home buyers’ scheme to allow people to buy a house with only 5% of a deposit*. The scheme also expands from 10,000 places to 35,000 places a year. This also includes a new regional housing scheme.

Dr Chris Martin, a housing policy expert at the University of New South Wales, said to the Guardian today this was like saying ‘let them eat cake’.

‘Thirty percent of low-income people on the private rental market do not have $500 in savings for emergencies, let alone a 5% deposit for a home loan,’ Martin said.

He said this would help ‘relatively few people who are already in a position close to attaining home ownership.’

‘This guarantee allows them to borrow more than they would otherwise be able to and outbid someone at an auction, possibly setting a new price at the same time.

‘Renting should be a decent, secure, long term option for putting a roof over your head and having a home,’ she said.

‘The best way to support renters is to lift their incomes so they can better afford rent, and build social housing.

‘The housing measures announced in last night’s budget will only push up house prices.

‘They won’t help people on the lowest incomes keep a roof over their head.’

The budget includes $100 million a year for the next five years to pay for the next stage of the National Mental Health and Suicide Prevention Plan.

The money is split between several organisations, services, and government agencies around the country, including $42.3 million over four years for Lifeline and $14.8 million over five years for Headspace.