Mansplainer: Has #MeToo gone too far? We assembled a diverse panel of men to discuss

By Glass Gazette September 28, 2021 No Comments 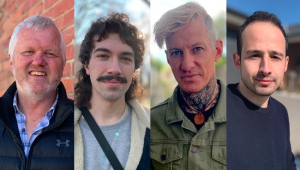 Image courtesy of the ABC.

Heavily discussed in recent weeks has been the topic of women’s safety – at home, on campus, and in public spaces.

After the National Summit on Women’s Safety ended without much resolution the Glass editorial board decided to think about what we could do to shed some light on the important issue.

The #MeToo movement has been an important precursor to women coming forward to talk about assault and trauma publicly.

But recent incidents involving our friends from private school really had us wondering if the movement has gone too far.

Richard Tate, a 24-year-old mechanical engineering student, was quick to remind us that not all men should be targeted by threats of accountability.

“I think we are getting better in terms of women’s rights and that stuff,” he said.

“Like, take me – I’m a good guy, right? I don’t make comments about women and that kind of stuff.

“But asking me to police the behaviour of my male friends is really a lot of unpaid labour that I didn’t sign up for.”

The idea of men being forced to pick up the slack of a few bad apples was echoed by Hugh Jorgen, a 39-year-old lecturer of Legal Research.

“I just want to say that I really do believe in equality between the two genders,” Jorgen emphasised between sips of tea from his ‘Bazinga!’ mug.

“But if you are looking at equal – where are the male writers and researchers on the topic of women’s safety?”

“In fact, I would like to see a little more research into men’s safety.”

There were general nods in agreement from the panellists, before Patrick Riarchy, an 18-year-old store assistant interjected.

“I get that we’re kind of playing the devil’s advocate a little bit here, but I do think we can find a middle ground.”

“My dad told me that there are always two sides to every story and that you should walk in someone else’s shoes before you judge them.

“Is it possible that some women just haven’t walked a mile in a man’s shoes?”

“It’s so different nowadays,” he said.

“You know, when I was a lad, if they’d have had all this nonsense they have now, they’d have called me a creep and come after me.

“It was a different time and a different culture, or are you saying that people like me are in the wrong now?

“I find that difficult to believe.”

The panellists all left their individual marks on the issue, and collectively raised the question, what are women going to do about women’s safety?

In an effort to achieve gender equity on the Glass team, and donations from their respective fathers, we have offered Mr Tate, Mr Jorgen, and Mr Riarchy, full time roles writing opinion columns.

Glass does not stand for misandry or straightphobia.

In loving memory of Guy Faux, who contracted COVID-19 at a protest in Melbourne. His spirit will live on in our sons and spouses.

Yes this is satire.