Hit enter to search or ESC to close
Film ReviewsOpinionSubmissions

By Submissions September 30, 2021 No Comments 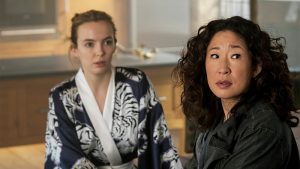 Killing Eve was the show that had even Sir. Ridley Scott waxing lyrical about television shows overpowering movies today in capturing people’s attention and in capturing the zeitgeist. You could attribute this kind of immediate acclaim and respect to Phoebe Waller-Bridge’s sharp writing in the first season or Jodie Comer’s star-turning portrayal of a feminine but murderous, pseudo-antagonistic character “Villanelle”. Much of the appreciation for the first season, however, was deservingly directed towards the show’s lead, Sandra Oh. She was, after all, an industry veteran whose talent had largely been overlooked due to her South-Korean heritage or North American-Asian identity.

Her most notable work up to that point was playing “Christina Yang”, a supporting character in Shonda Rhimes’ monster television hit, the American medical drama Grey’s Anatomy. Hers was a fan-favourite character and yet it was paradoxical how, in her most path-breaking and a never-seen-before portrayal of a complicated woman who also happened to be Asian. She was still, to a large extent, relegated to playing the stereotype of the best friend troupe. Oh, along with other actors of colour, particularly of Asian heritage like Dev Patel for instance, have in the past talked about the lack of opportunities in the entertainment industry and how this environment forces them to bring creativity and depth in characters that have no scope on paper and borderline on a stereotype. Perhaps this is why, Oh being casted as a lead on Killing Eve was perceived by many as a monumental shift because for a change, the writers could service her talent in a deserving fashion.

Of course, this moment in time was fleeting. Season two and three of Killing Eve were subsequently released to largely mixed reviews. Each season was led by a different female show-runner, a set-up designed by Waller-bridge before her departure. What initially seemed like an earnest attempt at providing leadership opportunities rarely afforded to female writers in the industry, later eventuated in episodes that were simply lacking both in substance and in entertainment factor. Earnestness does not always warrant success and the last two seasons of the show made it apparent.

The writers also seemed hell-bent on side-lining Oh’s titular character “Eve”. This being the most obvious in the third season where there is an entire episode with ‘Eve’ missing. This occurrence might have left many curious viewers to wonder, what transpired behind the scenes for something like this to happen? Isn’t it both an unspoken rule and a universal contractual obligation that the top-billed person who plays the lead AND the titular character has to naturally appear on all episodes of the show? This question was answered in a recent controversy surrounding the show’s writer’s room.

Here’s what happened: Amid the pandemic, most productions on both sides of the Atlantic were halted due to lockdown restrictions. As a result, the writers of the show were left with no option but to communicate with each other in true pandemic fashion over Zoom. The now-deleted picture of one of the Zoom meetings was shared by one of the head writers on Twitter. What initially seemed like an innocent post, later stirred multiple discourses on Twitter centring the lack of diversity apparent in the picture. A lot of people were rightfully left wondering, how is that a show with an Asian woman in the lead with a very specific experience had no single Asian person or BIPOC person in the writer’s room to authentically translate that experience on paper? And if perhaps, this was the reason why Oh’s character ‘Eve’ lacked a complete sense of direction after season one?

Post 2020, it seems likelier than ever that these suspicions are (low-key) embedded in the truth. The year 2020 as universally hated as it was, served as one great reminder of inequities prevalent in our world. The brutal murder of George Floyd ended up having a domino effect in the individual perspectives of people spread across all arenas and walks of life. The creative industries were no different. In 2020 as many black creatives shared their stories of facing racism, micro-aggressions and gatekeeping in the workplace. Other creatives of colour were able to stand on their shoulders and share their own experience with white supremacy in all its various forms. The most rampant of which being, at least in the entertainment industry and the creative industries at large, the decentralization and the lack of ownership of ethnic stories.

Constance Wu of Crazy Rich Asians fame in an interview with photographer Sam Jones on his show, “The Off-Camera Show” said something along the lines of, “even though you are physically at the centre of your experience, that does not mean that there aren’t other experiences that don’t centre you”. This quote stands true for many things and for Killing Eve.

Subham Rai is a postgraduate student completing a Master of Digital Communication at QUT. His ramblings on everything under the sun can be found at subhamrai.blogspot.com.