Hit enter to search or ESC to close
FeaturesOpinionSubmissions 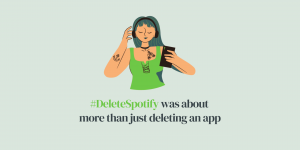 Picture this. Two almost 20-year-old women in a tiny blue car, windows wound down because if the aircon was on, the engine would barely have enough power to lurch the car around a corner. The Bluetooth is connected, and the car’s tiny stereo is blasting You Can Call Me Al. The whole of North Lakes can probably hear them singing (or perhaps more accurately, howling) along.

The women are my bestie and me. I swear she chose this song on our drive home because she knows how it sends me wild. She denies it, of course, as the growl of the gearchange she instigates merges with the sound of the deep bass solo, saying it was just shuffled in her playlist of 80s bangers.

It felt like a lifetime ago since I last heard You Can Call Me Al, when in reality, it had been less than two weeks. Those two weeks had been marked by an absolute dearth of music and an emptiness that can only come from missing the sweet euphoria of music filled ears. During these weeks without music, the days seemed to stretch out. My mind felt cloggy as my body lumbered quietly through my day.

‘Why the hell hadn’t I put on music?’ I wondered as I reacquainted myself with a host of 80s songs carefully curated into a playlist by the woman next to me. Listening to music is one of my favourite pastimes, after all. Hell, Paul Simon – whose song You Can Call Me Al had kickstarted our drive – is one of my favourite artists *ever*, why the hell haven’t I listened to *him* of all people for weeks? Hadn’t Simon & Garfunkel been hilariously overrepresented on my Spotify Wrapped last year, accounting for half of my top songs?

Ah, Spotify. There was the problem.

It had been two weeks since I saw the hashtag #deletespotify. I hadn’t touched the app since.

Misinformation spread by poor decision-making: that’s the Spotify story in a nutshell. It’s been analysed – and rightfully slammed – by many writers much better than me. To sum it up, Spotify, a corporation worth approximately $29 billion, put its profit-margin and a $200 million relationship with podcast The Joe Rogan Experience before the wellbeing of regular people during a deadly pandemic. This prompted several artists, including Neil Young and Joni Mitchell, to abandon the platform with the hope of taking their fans with them.

But this essay is about a girl who felt she had lost music and then found it again.

Back in my friend’s tiny blue car, our foray into Graceland ended as You Can Call Me Al was shuffled with I Got My Mind Set on You by George Harrison, which I belted proudly, my friend joining me for the verses she knew. Our voices were passionate, joy written upon our grinning faces. I could see my giddy grin looking back at me in the wing mirror, my dangling face mask flapping as wind swept through the car. I’ve often found myself amused by the way my face contorts, making strange shapes as I mime along to music, never once hoping to aspire to the incomparable vocal gymnastics of my favourite singers. In the car that afternoon, I could see my friend’s face doing similar dramatic expressions to my own, though her eyes thankfully stayed trained on the road ahead. She gestured her hands like she was having an animated conversation as she impressively recited lyrics word-for-word to the next song shuffled, Escape.

When people took to social media in the wake of the Joe Rogan controversy exclaiming they had deleted their Spotify accounts, and I was left in limbo – was anyone who still had a Spotify account complicit in the spread COVID-19 misinformation, regardless of whether they had even heard of The Joe Rogan Experience? Was I complicit?

I couldn’t bear the thought of deleting my account, so I simply ignored it. I ignored it, uninstalled it, and logged out of the app on all my devices. I ignored it for two whole weeks as I agonised over whether to delete it or not.

Deleting Spotify felt like more than just removing access to a streaming platform. It felt like erasing years of my life. Like burning a unique record composed of myself. It was a diary of my musical tastes, interests, and feelings spanning years. Erasing the hours and days spent making and arranging playlists, trying to concoct the perfect selection of songs to capture a mood. Happy playlists, sad playlists, desperately-wanting-to-be-a-mediaeval-knight playlists, the playlist of your all-time favourite songs (that always, *always* ends up too long).

I couldn’t delete my diary. So, I hardly listened to music for two whole weeks. To my own loss.

Music has this strange effect of taking you out of time. Of making you forget the troubles of the here and now just letting your body feel.

In the car, my friend and my bodies were strapped to our car seats. Those of our limbs that remained unstrapped were free to move to the music. My friend’s fingers danced around the steering wheel, while my own mimicked the movements of a guitarist, moving up and down an imaginary fretboard, even though I didn’t have the faintest idea what the songs chords were or how to even form them.

It is easy to lose yourself in Spotify. It finely attunes itself to your tastes. It starts to know you better than your own family, maybe even better than you know yourself. It’s like any social media platform really, except the genius – the danger – is it doesn’t feel like social media. It assuages any scepticism you have with the joy of music. Spotify feels more personal than other social media platforms because there is limited interaction with other people, so you develop a unique, personal connection to the app. You let it do things to you and your data you probably wouldn’t let other platforms do. Spotify becomes your cool little friend who knows and shares the same musical taste to you. So, when you find out Spotify isn’t the cool little friend you thought it was, neatly bundling little packages of musical joy just for you, you feel tricked, even though you should have known it was like this all along. Your diary would let people die to maintain its profit margin? Tough, baby. We should have all seen that one coming.

My friend dropped me at my house as Roy Orbison’s voice carried the chorus to You Got It, our drive ending far too early. We told each other how much we had enjoyed the afternoon spent together.

‘We should do this again – it was amazing,’ I said, smiling.

My friend grinned back at me. ‘Definitely! Hit me up dude!’

We stared at each other wordlessly, unable to articulate our shared joy. We hugged each other, our bodies still buzzing from the musical adrenaline.

I got out and waved goodbye to my friend, to her tiny blue car, and to the music it played as its wheels kicked up the dirt outside my driveway and re-joined the traffic on the road. I could still very faintly hear the sounds of music coming from my friend’s tiny blue car.

My day had been brilliant, but the ending in the car with the music had been truly re-invigorating. I had spent it in the company of not one but two old friends I’d missed dearly – the woman who drove me and the music.

Later that afternoon, I re-downloaded Spotify and went into my account for the first time in weeks. The first thing I did was make a playlist called ULTIMATE CARTRIP and added all the 80s bops my friend’s car had played. The mood, the sounds, and the joy of that afternoon now perfectly captured forever in the latest entry of my musical diary.