An Open Letter from the QUT Student Guild Women’s Officer 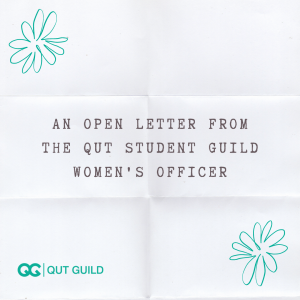 Being a woman can be disheartening.

But in my very first semester, I found myself silenced by my all-male group project. I’ve had numerous fun nights out turned into running from red flags, and the task of being a strong and safe woman has at times been exhausting.

By the end of my second year, I was finally learning how I fit into a world that wants me to stay meek in the corner. But I didn’t want to do that at all.

When I ran for Women’s Officer, I let my anger, frustration, and pain embolden me to stand up for all women at QUT – to be the voice to say we’re sick of the constant battle to be respected.

But when I first started in the position, I didn’t feel more respected. I felt lost. When I explained to male students what it is I do, I would get replies of, why should women get their own officer? Why do women need support? Get rid of all these women’s groups.

The truth is, people think that just because women can vote and attend university that my role to work towards gender equality is useless.

The first significant event I was faced with in my new role was the uproar on Stalkerspace 2.1. A post that was intended to be celebratory about the high rates of women enrolled at university turned hostile. Some men’s fragile masculinity was exposed when they decided to voice their unsolicited opinions about how upset they were that women went from being excluded from tertiary education to outnumbering men.

It’s true that women aren’t underrepresented at university anymore. 58% of Australian university students are women, and women have outnumbered men for over a decade. But how does this figure translate to full-time work in the “real world”?

Last year a study was released comparing six western countries on gender pay gaps – Australia ranked last. In the 80s, Australia was considered a pioneer in closing the gender pay gap. But, as more and more women enrolled in university, our outcomes remained the same.

Women drop out of university at three times the rate of men, due to the perception that their education is less valuable for life trajectory that that of a man’s.

Women with children struggle to receive adequate support to excel in their studies.

Women in male dominated courses are undermined in their classes and often feel discouraged.

Female executives of student clubs report not feeling as confident or supported compared to their male counterparts.

And to top it all off – there was a human rights commission into the staggering amount of sexual assault on campus.

Women are underrepresented in positions of leadership in the workforce, women are the minority in STEM, and women are still more likely to earn less after they graduate.

Women and men get into graduate jobs at an equal rate – which is not proportional to the number of students graduating in a year, indicating that men are more likely to get a graduate job than women. Additionally, men are not pushed out of fields dominated by women. With an intersectional lens, these statistics become even worse for Black, Indigenous, other women of colour and women with disabilities.

So, what does it matter that there are more women in university if we are more disadvantaged than men in every other facet of our life?

The best thing that we as women can do to create equality is to acknowledge the fight isn’t over. We need to ensure we aren’t complacent. Things may appear good on paper, but that very rarely equates to reality/actuality/equality.

But we shouldn’t be disheartened. A simple google search of ‘successful QUT Women’ comes with results of women becoming kickass entrepreneurs and researchers winning awards in STEM. We are surrounded by inspirational women everywhere we turn.  My lecturers and tutors are constantly inspiring me to go out into the world as a loud and proud woman. I’ve had group projects with women who have reignited my passion for my degree.  The women I work with every day on campus leave me in awe of all they’ve achieved and what they will accomplish in the future.

This year’s International Women’s Day campaign is #BreakTheBias and this theme could not be more fitting for women in Australian universities. We are incredibly lucky for the women who have gone before us who paved the path to equal access to education. But now it’s our turn to make the future even more female.

You don’t need to be outspoken to challenge bias. Be yourself, refuse to compromise your personality to make men comfortable and stop your friends from shaming other women for no reason. Be proud in your achievements and don’t let anyone tell you that you aren’t worthy or don’t deserve respect and admiration. Who knows, maybe in a decade we’ll be able to say we were the women that made another big step towards equality.

This Women’s History Month, I want to give men on social media complaining about equality even more to whinge about.  We’re the majority of university students. We are not weak. There is power in numbers, and imagine what we can accomplish if we all band together for a better future.

I can’t single handily stop all the sexism that women enrolled at university experience, but I vow to spend my year trying to empower the 58% of female students and hopefully together we can.

Don’t put down the protest signs. Don’t stop burning your bras. Don’t be scared to be angry.