Hit enter to search or ESC to close
ArticlesGlass GazetteSatire 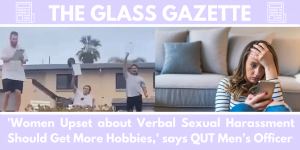 PERTH – The QUT Student Guild’s Men’s Officer Hunter Bystander has responded today to recent incidents of sexual harassment out of Perth by asking Gazette reporters if women ‘even have hobbies’.

The statement came after a video emerged of Perth men using A4 whiteboards and markers to rate the attractiveness of women on a Scarborough Beach thoroughfare.

Bystander was quick to change the subject when asked if he would condemn the men involved.

‘The men in the video said they were feminists so I don’t really know what’s the deal?’ Bystander said.

‘Do you ever notice how women don’t really have hobbies?’ He continued, alluding to a recent line of discussion among men’s rights activists.

‘I know one woman who sews, but they have to do that anyway.’

In the interest of the recent International Women’s Day and the ongoing Women’s History Month, Gazette reporters queried whether ‘misogyny by the beach’ constitutes a hobby.

‘Listen here – those men took a break from podcasting to drive all the way to Officeworks, and bought whiteboards and markers,’ Bystander said.

‘Not only should we consider that a hobby, but I believe that’s dedication to a craft.

‘Now that they have gone viral and will struggle to find full-time work, I believe they will likely be forced to take up more hobbies.’

One of the men in the video, Pierce O’Shiet, doesn’t believe in cancel culture, despite losing his job.

‘I don’t understand this fuss, we were having a laugh,’ O’Shiet said, turning the cricket down a little so he could hear us.

‘I’m literally being cancelled – and for what, making a joke about the baddies in the public space?

‘Hey snowflakes, it’s a public space, meaning I can do whatever I want.

Due to his recent unemployment, the Gazette understands O’Shiet is in talks to run for the Federal seat of Perth as a Liberal.

QUT Incel Society member and Gazette contributor Patrick Riarchy asked what the women were doing walking on the beach anyway.

‘With all this discussion of whether or not women have hobbies, I think it should be clear that a hobby would have kept all this from happening in the first place,’ Riarchy said.

‘By that I mean, if those women had hobbies, they wouldn’t have time to be sexually harassed.

‘I just think you really need to look at it from every angle.

‘Personally, I think we need to see this from the angle those men were seeing it from – some of those ratings were 10/10 for God’s sake.’