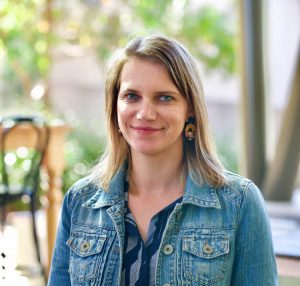 This week is QUT Sustainability Week, and during awareness weeks like this, we hear a lot about metal water bottles and beach clean-ups. While these endeavours are important, there are many facets of sustainability, even just within the QUT Community.

Glass sits down with Dr Katie Woolaston, a lecturer from the School of Law and an interdisciplinary researcher. Katie holds a PhD in Environmental Law from Griffith University. If you’re a law student, you may have her for LLB102. One of her core research areas is ‘human-wildlife conflict’, and I interviewed her to learn more about the intersection of the laws of nature, and environmental law, two similar-sounding but vastly different concepts.

I meet with Katie over Zoom. She’s sitting outside, working from home, and the sounds of the bushlands rustle behind her. We start talking about her role at QUT and her study area.

“I’m a lecturer and researcher in the Law School. I came to QUT when finishing my PhD, which was done at Griffith.”

Katie tells me that she’s doing research on the ways in which we ‘deal’ with wildlife that do not help human interests and needs.

”If you look at Dingo Attacks on K’Gari (Fraser Island) or shark attacks or any situation where animals are causing harm to humans, that’s what I study.”

She speaks on these topics with such a rich understanding; she’s got an ability to explain such vast topics to me with ease. We talk about how the law and policy affect our relationships and interactions with these animals in a way that I’ve never realised.

“Often,” Katie says “we have this relationship based on how law and policy frame the relationship rather than emotionally engaging with those species.”

We turn to her work, and I ask her to tell me what’s more challenging in her role, and what is particularly rewarding.

“Well, I’ll start with the more challenging, because it’s easy. Working in environmental law, conservation, or an environmental space is distressing. Because the people that need to listen don’t.“

These words sit for a moment between us, as we share an unsaid understanding of who those people are, and the immense cost of their inaction. She continues on.

”If we take the Great Barrier Reef, for years conservation scientists have been saying that its future is endangered and that coral bleaching is happening from global warming. And then you have the Australian Government, actively lobbying to have the endangered listing from UNESCO stifled. So that’s really hard and really distressing to take.”

“It’s the same with our wildlife, our extinction and threatened species rates just keep climbing. And climate scientists and social scientists continue to give a number of avenues we could take to lower those rates but unfortunately, other interests take priority in politics and that’s really hard to deal with.”

It’s hard to comprehend that someone as engaging and as well informed by Katie gets ignored in her research specialty area.

“It’s not all frustrating though”, she says. “It’s wonderful to work with students that are really keen and have motivation as the next generation. That generation has a much better chance of getting through than we do, because they’ve been acutely aware of these issues their whole life. They’re also much more aware of the direct consequences of inaction. So, that’s a really great aspect of my job, to see how that generation is using what they’ve learnt to enact change.”

She speaks with great respect and admiration for her students. Katie teaches Torts, Introduction to International Law and Animal Law. Considering the sentiment I have seen around the Torts exam, I assume that many of these conversations about conservation occur in the Animal Law unit. Katie continues,

“The rewarding aspect is when you do breakthrough, it doesn’t happen often,” She laughs. “I’m currently working with the Australian government around wildlife and disease, because of the pandemic. And they are listening and that’s really great.”

COVID-19, as usual, has entered our conversation, a seemingly inescapable reality that touches our lives more than we can comprehend yet. Katie tells me that the virus has so much more to do with human-wildlife conflict than we remember, referring to the live markets in Wuhan that started this virus off. It feels like a lifetime ago. I ask Katie about how she feels about people so often not listening to experts, in topics of the environment and public health. She launches in, clearly, she’s thought about this a lot.

“It’s happening in so many areas, there’s so many people with covid pushing back against experts when they don’t like what the experts are saying because it infringes on the way they want to live their lives and that’s really the nature of the environmental problems too. We need an exponential shift in how people live their life and I can understand that, but the long term effects are far more than small, liberal infringements at this point.”

“It really comes down to the nature of our legal system and the human rights system. Nationally and internationally, these systems are predicated on this  inherent understanding of individual autonomy. When you grow up in that system and that individuality is all you know, it’s really difficult to be confronted with the fact that actually, we’re not completely autonomous, we’re societal beings and we exist in an ecosystem. I think that’s hard for people to take because the legal system of our western society is inherently in contradiction with a collective response to large scale issues.”

I ask Katie about how she finds hope when faced with time running out of the hourglass on such time-sensitive sustainability issues.

”I don’t really know the answer,” she says.

”I know I have hope, because I know so many wonderful people who do such hard work. I just think, how can we be failing? When there are so many people who work so hard and are so great at what they do. The hope comes from the people that I work with and how students react to the content we teach in this space and the next generation.”

I can feel the mixed emotions in her voice, the hope mottled with a wish to do more.

“In a way, it’s terrible because we’re putting so much on the next generation already in terms of the effects of these issues, but we don’t know where else to go than to the young people”

We start talking about her work with ‘human-wildlife conflict.’ Katie’s research is about the environment and the law and how the two intersect, and I ask her about how important the law is in shaping conservation and environmental work.

“I think the law shapes nature way more than nature shapes the law and i think that’s a broken dynamic. Nature needs to shape law, law needs to react to what nature needs. Law is shaping our relationship with the environment, even shaping the environment itself, in order to follow the structure that law dictates.”

I tell her it seems as though there is a dissonance between law and nature when it comes to the most effective ways to manage conservation and environmental justice.

“Law does not equal justice, when it comes to the environment”, Katie says, “We’ve seen legal extinctions, because mines are allowed to mine in an area that is a species only natural habitat, and the consequence of that ‘legal’ action is that that species went extinct. Not fair but legal. Law and justice are two wholly separate concepts.

I ask her what environmental law does equal, if not justice.

“Most often when it comes to these interactions between humans and wildlife that have negative consequences for both species, it’s not usually the interaction, but the social conflict surrounding the action. So with dingoes, with sharks, the social conflict around those species is about how to ‘manage’ a problematic animal. Some people think we should cull all the dingoes on K’gari to remove that risk of people being injured or eliminate sharks to avoid bites. Others think it’s important that we have protections for their intrinsic value, and humans shouldn’t be allowed in the animal’s space. So those opinions make human-wildlife conflict make things like this incredibly difficult to resolve.

“The way that law interacts doesn’t have a concrete answer to these problems, for example, the law says we put up fences to separate animals and dingoes on K’gari. It can also shape the way someone thinks about a problem and how they react to it. So law as a process, can come in from the top and say the way we will manage a conflict is that we will remove human movement from an area and make it a national park. This happens a lot in developing communities in countries of Africa. So people are removed from their homes for the sake of wildlife, however, that just creates resentment towards the animals from the people that have been displaced by the law. Even a conservation effort like that can further exacerbate human-wildlife conflict.”

“Law has two ways of affecting conflict, directly as policymakers making an overarching decision which often furthers the conflict because it is not based in science and indirectly, by influencing the way humans think about that animosity.”

I asked Katie if she saw anything that the rest of us didn’t if there was something missing in our approach.

“I’m going to say there is no hidden gem, everything is connected, everything is interlinked. Covid-19 and human-wildlife conflict are interlinked issues.  People didn’t understand that the way animals and treated and traded at a market in China can drastically affect our world.”

Finally, I asked Katie what we as students can do, if issues like this stir us to action. Katie mentioned joining conservation societies, becoming educated on issues of animal welfare and conservation, and attending protests. In true lawyer fashion, she reminded me that she is categorically not encouraging people to break the law if protesting. Ultimately, her message was to get engaged and stay engaged.

“I think at this point, it’s about getting boots on the ground, getting people involved. The more people showing up, the more these issues show up in the minds of the general public.”

“Conservation is about sustainability, it’s about justice, it’s about climate action, it’s about pandemics, and it’s about future generations. These things should matter to everyone.”