Hit enter to search or ESC to close
ArticlesEnvironmentFeatures

This article was first published by One Woman Project.

Almost four weeks ago, my family and I had to evacuate our home, as the flood waters around Southeast Queensland began to rise. As a precaution, we had each packed a bag that morning and placed books, photos, and furniture up high. Yet none of us expected that by 2:00pm that afternoon, we would be wading through water, hauling our dog and bags over our back neighbours’ fence, and leaving our home.

Having lived on the other side of a creek for the entirety of my life, flooding has become a normalcy within our neighbourhood. It is the occupational hazard of living on low ground, across from a park, right next to Enoggera Creek. Which is something that, unfortunately, yet not surprisingly, continues to speak to the lack of understanding colonisers have  in relation to the land, how it operates, and where infrastructure should be built. (Aka: not across from a creek that is likely to flood.)

It became common knowledge that anytime between January-April, we had to be on alert for rising waters. We had the preparation down pat, we knew what to do, and yet nothing prepared us for this. Even when we look back now, my neighbours and I recount that we should’ve seen it coming. Something about this flood felt different. Where normally we experience a surge of flash flooding and then see it quickly recede, the park outside our house became a river for three days. On the Friday and Saturday nights before we evacuated, it was like we were living by the sea, the constant sound of the rushing water preventing any of us from falling asleep peacefully.

Within the space of a week, SEQ and Northern NSW experienced a years’ worth of rain, which resulted in the damage of over 20,000 Meanjin/Brisbane houses and businesses, the tragic loss of 22 reported lives (and likely many more), and entire towns in Northern NSW completely going under.

This flood was merciless and unforgiving. But unlike what our government is leading us to believe, should it have been “unprecedented”? 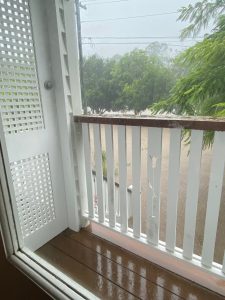 This image was taken 20 minutes before we evacuated, within that time the water rose another meter up the staircase. 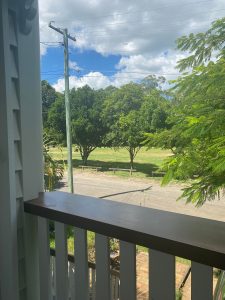 This image was taken after the water subsided.

In October of 2021, the Intergovernmental Panel on Climate Change (IPCC) issued an anthropogenic (human caused) climate warning in their Sixth Assessment Report that stated that “extreme rainfall intensity in northern Australia and New Zealand has been increasing, particularly for shorter (sub-daily) duration and more extreme high rainfall periods” and that with this projection comes the “increase in flood magnitudes in northern and eastern Australia” (IPCC, 2021). While the Commonweath Scientific and Industrial Research Organisation (CSIRO)’s 2020 State of the Climate Report repeats this sentiment, and explains that “as the climate warms, heavy rainfall events are expected to continue to become more intense. A warmer atmosphere can hold more water vapour than a cooler atmosphere, and this relationship alone can increase moisture in the atmosphere by 7 per cent per degree of global warming. This can cause an increased likelihood of heavy rainfall events” (CSIRO, 2020). Not to mention the fact that the Bureau of Meteorology forecast the risk of heavy rainfall and flooding many days leading up to the events that occurred.

Over the course of weeks, months, and years, we have been getting countless, and repetitive, warnings from scientists and climate change experts about the increased risk of flooding, and the need for drastic action now. Yet with all of the evidence pointing to the changes that our society needs to make, the way that our government has handled the last few months has been a stark reminder that the people who are in these positions of power to makes changes, simply aren’t.

And this extends further from the fact that our current government pours billions of dollars each year into the fossil fuel industry. Because while this is, of course, the most detrimental contribution to climate change at this time, there are numerous preventative measures we could be putting in place, to if not limit the risk of flooding, at least minimise its impacts.

Even with the extensive amount of warning that was given, very few people received evacuation alerts, and many were left to fend for themselves. It was only in the aftermaths of the floods, when communities were screaming their displeasure at the government’s lack of action, that texts began circulating around Meanjin/Brisbane to warn people of the “rising waters”. A National State of Emergency was only issued on the 27th of February, a week after the flooding started. For me, this not only highlighted their desire to avoid discussing the climate crisis so close to an election, but also that for all their talk, there is simply no nationally agreed upon strategy when it comes to dealing with these climate  .

A quote from the IPCC report that really stuck out to me was “adaptation to changing flood risks is currently mostly reactive and incremental” (IPCC,2021).  Implying that governmental change seems to only occur once the disaster has happened, rather than putting in precautionary systems to prevent the worst of the damage, or further, limit the effects of climate  .

By the time the government started putting things into action, or deploying the army to needed locations, we were already knee deep in mud and halfway through our clean up.  . The silver lining amongst all of this, has been the knowledge that in a crisis, your community is always going to be there with you to pick up the pieces. They are the ones who are going to make the changes. Who stand up and fight. And there’s something so incredibly empowering and wonderful about that. We all have a part to play in this crisis, and it’s beyond important that we do get political, use our voices, and make sustainable changes in our own lives to start fighting these problems from their roots. To get involved with intersectional organisations that support First Nations justice and land rights. To protest against big corporations and vote out the parties who continue to act against the environment. And to hold onto that anger that we all have. Because we have a right to.

The clean-ups across SEQ and Northern NSW have been largely driven by community volunteers, rather than government. And even when the Australian Defence Force have been deployed to numerous locations, there have been many unfortunate accounts of their lack of action (which I do feel is a reflection on their orders and the system they operate under, rather than the individuals themselves). Our local Bushcare group were devasted when the ADF came through our park and assisted with clean-up, but without any environmental consultancy, they removed many trees and native plants that could have been restored, and left the reminder of their work for our community to clean  .

But above all of this, I think the scariest and most harrowing thing this flood has brought to life for Australians, is the knowledge that a flood of this nature, is certain not to be the last. It has reminded all of us that the effects of the climate crisis are not 30-50 years away, they are here now. I think the reality is, many of us, including myself and my family, have previously had the privilege of not being exposed directly to the effects of climate change. We have seen them in increments, and of course in the devastating 2020 bushfires, but there are many of us who have been able to view it from a distance. Now we are being faced with the knowledge that this is not a one-time event. That if the statement that “the current 1-in-100 year flood in Australia could occur several times a  ” (CSIRO, 2020) is something to go by, many of the places we have built homes and made lives, may not be viable in the next 20 years.

It’s so easy to feel helpless in the fight against climate change, and while I want nothing more than to end this article with words of hope and reassurance, of which there are in fact many, there’s a strange powerfulness in recognising that hopelessness, because it allows us to see the issue for what it truly is. Because, when I was sitting in my room, watching the water rise up my front staircase, I wasn’t thinking about the government, or what they have or haven’t done, I was thinking about survival. 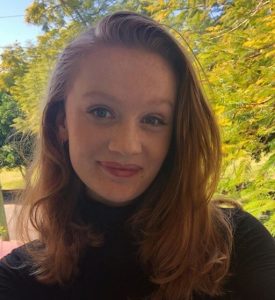 Maggie Mackenzie (she/her), is a Meanjin/Brisbane based writer and editor, with a Bachelor of Fine Arts (Creative and Professional Writing) from QUT. She is currently studying a Masters of Writing, Editing, and Publishing at UQ, and is the National Co-Director of Online Engagement of the One Woman Project, a youth-led, intersectional feminist organisation.