Hit enter to search or ESC to close
ArticlesGuild President

Hello, my name is Oscar, and I am the President of the QUT Student Guild. I am also Roma, or what some of you may know as gypsy. Today, April 8, is International Roma Day, and so I felt it important that I use this opportunity to write about our wonderful people, and hopefully educate some of you about our community, and some of the struggles we continue to face.

Something I’ve always been quite outspoken about, especially in recent years, is correcting people on what to call us. The word “Roma” was adopted by our community at the First World Roma Congress in 1971. The most important thing to get out of the way is, Roma and gypsy are not interchangeable. They do not mean the same thing.

History of the word “gypsy”

Roughly 1000 years ago, the Roma were forced out of northern India. Thus began 1000 years of migration, nomadism, and further persecution. Roma travelled through West Asia, the Middle East, and many of us found ourselves in Europe. Coming from Northern India, most Roma had dark skin, dark eyes, and dark hair. Many Europeans’ only interactions with people of darker complexion came from Turkey and North East Africa. The story goes that Eastern Europeans thought that Roma were Egyptian. Egypt -> Gyp -> Gypsy.

The origins of the word itself is problematic, as we’re not Egyptian, we’re Roma. However, it is easy to dismiss this as a mistake, which warrants discussion about the past and present treatment of Roma in society.

During World War Two, more than 500,000 Roma were systematically exterminated in the Holocaust. This amounted to 80% of the Roma population. We call this the Porajmos, or ‘the Devouring’. A specific “Gypsy Camp” (Zigeunerlager) was established at Auschwitz for the extermination of Roma. The Porajmos was not recognised as a genocide by Germany until 1981.

Roma were also victims of 500 years of chattel slavery in Romania, which only ended in 1860.

Segregation is still common across Europe. Schools, churches, shops, and villages are segregated across Europe, including in Italy, Hungary, the Czech Republic, and Ukraine.

And racism against Roma people is overt in Europe. Zsolt Bayer, co-founder of the currently elected Fidesz Party in Hungary has been quoted saying:

‘ The Roma are unfit for coexistence. They are not fit to live among people. These Roma are animals, and they behave like animals. When they meet with resistance, they commit murder. They are incapable of human communication. Inarticulate sounds pour out of their beastly skulls. At the same time, these gypsies understand how to exploit the achievements of the idiotic Western World. But one must retaliate, rather than tolerate. These animals shouldn’t be allowed to exist. In no way. That needs to be solved immediately and regardless of the method.’

Gypsy developed into the word gyp, which is a synonym for stealing, hence the phrase, ‘I’ve been Gypped.’ This is a false and harmful stereotype that has followed our community for hundreds of years and follows us to this day.

Message I received from a friend when she was in France.

This stereotype is harmful for a number of reasons, mainly that it is untrue – you have the same chance of being pickpocketed by anyone – and that it ignores the effect discrimination and persecution have on criminality. It minimises crime to a personal feature of the Roma, rather than a situational response to discriminatory legislation that keeps Roma in poverty.

The media tends to portray Roma people in two key ways. Either as a poor beggar and a pickpocket, or a hyper-sexualised temptress (the most common representation of the latter is Esmerelda from The Hunchback of Notre Dame).

‘Her complexion was dark… she danced, whirled, turned around… her large, black eyes flashed lightning… with her smooth bodice of gold, her colourful dress that swelled with the rapidity of her motions, with her bare shoulders, her finely turned legs that her skirt now and then revealed, her black hair, her flaming eyes, she was a super natural creature… in truth,’ Thought Gringore, ‘she is a magical creature, a nymph, a goddess, a bacchanae of Mount Menelaeus!’ At that last moment one of the magical creature’s tresses came loose, and a piece of yellow brass that had been fastened to it fell to the ground. ‘But no,’ he said, ‘she is a gypsy!’ The illusion was shattered.”

Due to the way Roma women have been represented in these two lights, the word gypsy is incredibly dangerous to Roma women. Either a criminal to be persecuted, or a mystical sexual creature to be conquered.

The word gypsy has transformed into a synonym for “free-spirited”, a fetishisation of nomadic lifestyle of the Roma. This was not a lifestyle that was chosen, but one that was forced via 1000 years of murder, genocide, torture, and slavery. This is not a word to be rebranded because you had a life-changing experience while back-packing. It is a word with a millennium of pain behind it. There are thousands of ‘gypsy’ rings, earrings, books, and more being sold online, appropriating a word which has been used to persecute, for a quick profit due to the wanderlust of an ethnic minority.

My Relationship with the Word in Australia

I have a complicated relationship with this word gypsy in Australia. In the UK and Europe, it’s well known that ‘Roma’ is the correct term for us, so when people use terms like gypsy, or cigani (Eastern Europe), or zigani (Germany), it’s quite evident that the word is intended as a slur. Whereas in Australia, we face very little oppression. There are very few of us here, between 5,000 and 25,000. Many people do not know we’re here, and those who do often have no idea the word gypsy is considered a slur by our community, or what the appropriate is. Therefore, I struggle communicating my culture in Australia. The conversation usually goes something like:

Them: So, what’s your background?

Me: *sigh* You would probably know us as gypsies.

After which I have to go through the motions of explaining the origin of the word, how it is rooted in 500 years of slavery and racism. It’s often easier to go ‘I’m a gypsy’, which sometimes feels like a betrayal of my community.

So, I’ll finish this article the way I started it.

Hi, I’m Oscar and I’m the President of the QUT Student Guild. I am Roma, not gypsy. 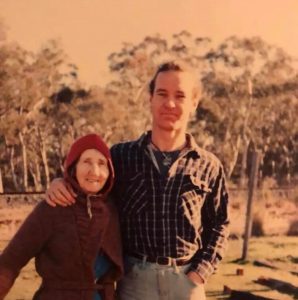 My Roma father and grandmother.