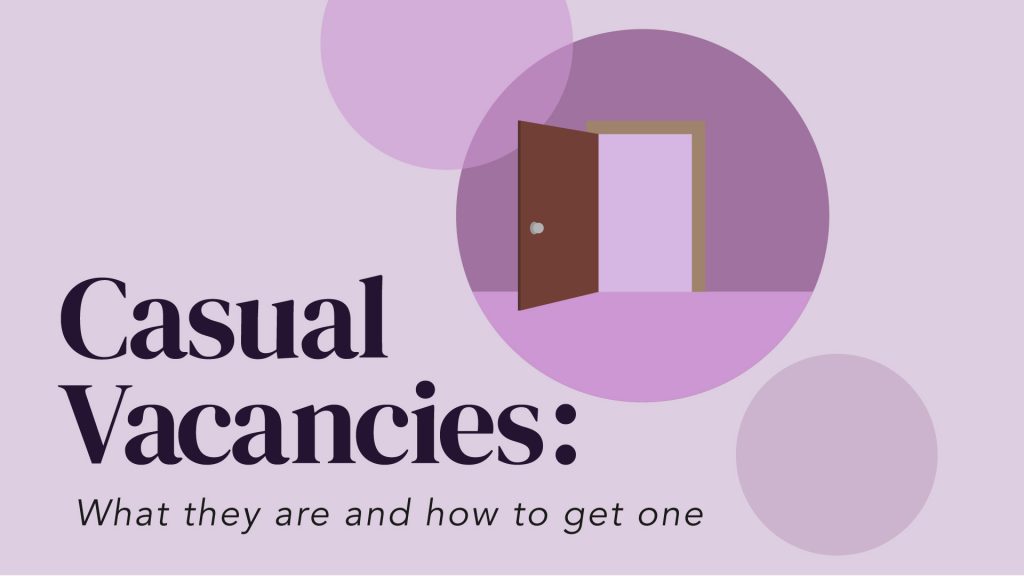 If you know much about the QUT Guild or Glass, you may have seen some casual vacancy notices pop up every now and then. For a lot of people, a casual vacancy is a foreign concept. Basically, it is one of the ways to get involved in the Guild and represent students at QUT. We’ve decided to break it down and explain casual vacancies for students, what they are, why they exist, and how to get one if you want to apply.

What is a casual vacancy?

In the QUT Guild, a casual vacancy (casual in the sense of “by chance”) is a situation in which a seat in the organisation’s structure becomes vacant during that seat’s term. They happen when an elected student leaves their role mid-year, and needs someone to fill it until the end of the term. QUT Guild election terms are December 1-November 30 of the following year. Because the Guild is a not-for-profit organisation, they are governed by a Guild Council of elected students, and that is what a casual vacancy elects – someone to refill the council and sometimes operational elected roles.

I thought the Guild was elected each year?

Usually, they are. Student elections are usually held at the end of Semester Two, when any student can put their hand up to run in the election. You’ve probably heard of them or at least seen memes about them in stalkerspace.

The casual vacancies are a bit different. Students elected to the Guild are supposed to run a one-year term, and who gets that role is decided by students in the election. For casual vacancies, the rest of the elected Guild council votes for the position on behalf of the students. The logic for this is that those elected students were entrusted by students to operate the QUT Guild, and by extension, the casual vacancies. It’s a micro election to the role, rather than the traditional hiring process.

Why do vacancies pop up at the Guild?

These vacancies pop up for the same reasons they happen at other workplaces, people resign. It may be the role isn’t for them, or they need to focus on study, or they get another job; there are lots of reasons for moving roles. The reasons for people leaving is not Glass’ business, we prefer to focus on highlighting the position being available and showing students how to get elected.

Has Glass had casual vacancies?

Yep! Glass has had two casual vacancies, with two of our elected editors leaving to pursue jobs in their field of study. We were sad to see them go but happy to see them succeed in their growing careers. We advertised a casual vacancy position and had editors Tom and Christina elected through the process at council. Glass does not currently have any casual vacancies for the editorial team.

What vacancies does the Guild have at the moment?

Currently there are three positions open at the Guild, one volunteer role and two paid roles. These roles are the SEF Faculty Councillor Role, The QUT Guild Secretary, and The QUT Guild First Nations officer. Below is a bit of information about the roles.

Requirements: Must be a SEF student, must be a QUT student enrolled until the end of the year at minimum.

Time Commitment: As required for events and council meetings.

Requirements: Must be a QUT student enrolled until the end of the year at minimum.

Requirements: Must identify as First Nations, must be a QUT student enrolled until the end of the year at minimum.

These positions are still open despite the end date being the 27th of April in the position description, they were not elected at the last council meeting and therefore will roll over to the next council meeting.

There’s nothing here I want to do, will there be other roles?

Potentially. Someone in a role has to resign from the QUT Guild to trigger a casual vacancy, so without a crystal ball, I don’t know if there will be any more casual vacancies this year. The best way to know is to check out the QUT Guild Noticeboard, that’s where a vacancy will be posted if there is one in 2021.

The other way to get a role is to run in the election at the end of the year. Glass will be covering this closer to the date!

I want to do one of these jobs! How do I apply for one?

Start by seeing if there’s a role available that applies to what you want to do with the Guild, read the position description and write and send that email! If you think you’re right for the role, the Guild would love to hear from you. After your application is sent in, it will be provided to council members and you will be invited to attend the council meeting where your election is taking place, and you’ll be allowed to speak to council to advocate for yourself. Council will vote on the applicants and the role will be announced on the night. It’s definitely a non-traditional hiring process, but one that’s worth being a part of.

I asked Christina, one of the Glass editors, what she thought of the process of her becoming a Guild Executive through the casual vacancy process. “I felt like this gave me a chance to show myself for who I am, rather than a resume. It can be daunting being elected by your peers in that setting, but it was nice to present myself authentically for a role.”

We hope this has helped better explain what a casual vacancy is and how they work at the Guild, and we hope that maybe it has empowered you to apply for one!