Hit enter to search or ESC to close
ArticlesFilm Reviews 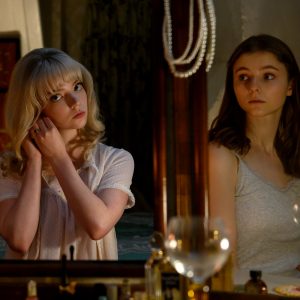 Content warning: This review addresses themes of violence against women and sexual assault.

Edgar Wright’s unimaginative homage to a 60s London devolves into a contrived neatness that fails its protagonists.

A psychological thriller split between the current day and the swinging 60s, Last Night in Soho’s characters are linked by place: London – or more specifically, London’s famous red-light district. We meet Ellie (Thomasin McKenzie), a shy teenager from Cornwall who moves to London to pursue fashion design. Ellie, who lives mostly in her head, is obsessed with the iconography of what she sees as London’s golden age. Her vintage style, records, and demeanour land her on the outer with her university dorm mates, and she winds up renting from a strict landlady, Ms Collins (Diana Rigg).

On her first night in her new place, Ellie experiences a series of vivid dreams in which she is transported through time to the Café de Paris in the 1960s. In these dreams she watches a confident young woman, Sandie (Anya Taylor-Joy), enquire about becoming a singer at the club. She meets her eventual manager and boyfriend, Jack (Matt Smith), who at first seemsto be her in to the London nightclub scene.

But things soon take a turn in Ellie’s dreams, and she begins to spend her waking hours obsessing over Sandie’s fate. ‘This is London,’ Ms Collins insists when Ellie asks whether someone has ever died in her room, ‘people have died in every room.’

The film brings the 1960s to life through its impressive use of sound and cinematography, and some fantastic casting. Soho is clever and stylish in its first half hour, but the plot’s gradual evolution into horror sacrifices the established atmosphere of sci-fi/fantasy nostalgia, in favour of stale shock value. It is, at times, so confidently transparent that it gets too far away from its premise and can’t be brought back.

Sandie functions as a refuge for the lifeless Ellie, whose erratic actions become increasingly difficult for the viewer to rationalise. She is rendered completely passive by a plot that moves without her, and her turbulent, disturbed actions aim for sympathy but only elicit cringe.

This is all meant to play off of moving – and obvious – themes about ambitious creatives and their personal crises, but Wright’s ideas about women and ambition never make it into focus. The resulting patchwork of traumatic memories fails to develop its inhabitants beyond unmoving archetypes.

Soho also has a problem with subtlety. Wright uses a tracking shot to follow Sandie out of a nightclub and into a parent’s worst nightmare scenario that doesn’t work as a revelation or as a shock. These moments act as an exclamation mark after conspicuous themes like Fallen Woman and Betrayal, but ultimately get in the way of any interesting storytelling.

Wright, as in his previous work, leans into an upbeat soundtrack which he relies on to cover up the film’s structural cracks. While this may feel unsatisfying, it is certainly effective in establishing a powerful atmosphere for Ellie to become lost within.

It’s striking that a film of such scale can feel so thin on characters. It is eventually revealed that Sandie is in fact Ms Collins, and has murdered several abusive men in her home, and she then opts to try and kill Ellie to preserve her freedom – despite Ellie having lived these traumatic memories herself and being completely supportive of Sandie. The film’s contrived climax then tries to have it both ways when Sandie dies in a fire after letting Ellie go.

This sequence of events erases the bond built between the two characters, as well as audience sympathy for Sandie. A determined woman abused by more powerful men – her arc could have been more compelling than this ending gives her. One wonders who is actually intended to be the bad guy in all this – the abused woman portrayed as a crazy person, or the abusive men portrayed as victims?

One also wonders whether Wright was so preoccupied creating another jukebox film that he forgot to actually write his female characters. The result is a film that wants for an ending … and a point.