Hit enter to search or ESC to close
ArticlesFeaturesFilm Reviews 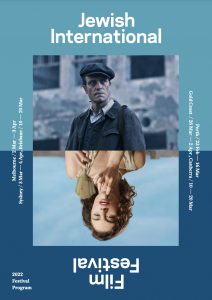 This March, the 2022 Jewish International Film Festival (JIFF) is coming to Five Star Cinemas in New Farm. The cinema will feature selections from the festival between the 10th – 20th of March, and will feature the Australian premiere of 55 feature films. I spoke with JIFF Artistic Director Eddie Tamir about what audiences can expect from this year’s festival.

Tamir has been involved with the festival for the last ten years and says he always enjoys putting together a program that is eclectic and can appeal to both a Jewish and general cinema audience.

‘We have a lot to play with and the last 10 years have been great. We’ve had great support from all those different types of groups and it motivates us to keep it growing, to keep it compelling, and to have a world-class film festival.’

The theme of the festival for 2022 is “adapting to change” with many films in the program exploring the challenges accompanying change. Eddie states that the theme of change was one he felt was especially relevant over the last two years.

‘It occurred to me, in this sort of COVID/post-COVID era, that the last two years have been a classic case of needing to adapt to change … many of the characters, be they real-life characters in documentaries and biopics, or fictionalised characters, are dealing with change in our films. I guess there has been a history of Jewish people needing to particularly deal with change. So, it felt like an interesting theme to cluster the festival around.’

The festival opens with a showing of Simone Veil, A Woman of the Century on the 10th of March at New Farm Cinemas. It’s a biopic about French politician Simone Veil, but Eddie says that while she may not be in the Australian or American zeitgeist; she’s definitely in the European one.

‘She’s the equivalent of the Ruth Bader Ginsburg of Europe … Simone Veil was a survivor of Auschwitz and went to live in France after the war. She became a lawyer, a human rights advocate, a member of the French parliament … at which time she was instrumental in changing abortion law in France, and she went on to become the president of the European Union. A colossal woman. It’s a biopic directed by Olivier Dehaan who previously directed La Vie En Rose, the Edith Piaf story. So, it’s a film of the highest quality.’

The festival will also mark the premiere of two films from two Australian first-time directors. The first one showing is Mother Mountain by writer-director Celina Stang.

‘It’s quite a personal story. It’s about a Jewish woman and her husband and children that leave the big city and go into rural Australia where they contact an Indigenous Australian community at the foot of this very important mountain called “Mother Mountain” in Indigenous culture [‘Gulaga’ in the Yuin–Kuric language]. She finds in this cross-cultural exchange some healing and a way forward. That’s a great Australian drama.’

The other film is The Narrow Bridge, a documentary by Melbourne-based director and clinical psychologist Esther Takac.

‘In the theme of healing, her focus for the documentary (which is very well-made, particularly for a first-time director) is on a Palestinian man and an Israeli-Jewish man and each of them who have lost children to the conflict in the Middle East. It’s their stories as they deal with their own pain and attempt forgiveness and personal healing as well as healing each other and the wider world.’

Eddie also recommends the documentary Hallelujah: Leonard Cohen, a Journey, a Song. In the vein of recent shows like Netflix’s docuseries Song Exploder, it’s an exploration of an artist’s music through a single song of theirs.

‘There have been a couple of films made about Leonard Cohen since his passing and this one is first-class. It has a particular focus; which is the song “Hallelujah” and his journey writing that song. When it was first recorded it was kind of ignored in the American landscape and CBS Records, who had the rights at the time, didn’t want to even release the album that “Hallelujah” was included in (Various Positions).  Over the decades, it has been taken up by various amazing and famous artists who have done cover versions. The song has evolved into an anthem for all humanity.’

This year’s festival closes on the 20th of March with a screening of the first two episodes of the new Israeli series Beauty Queen of Jerusalem. The series follows two families between the ’20s and the ’50s through the Ottoman Empire, the British mandate, and the state of Israel. Eddie says he’s very excited for audiences to be able to see the premiere of this show on a big screen.

‘We like to include TV Series and obviously Israel has made some pretty hot series in recent times (Shtisel and Fauda for instance). There is a real excitement about Israeli series. We get very specific windows so we premiere before it goes to a streaming service. It just suited the time frame to close with it and we just think it’s an exciting way to end the festival. Beauty Queen of Jerusalem is one the hottest series of the last 12 months in Israel.’

While this year’s festival is exclusively in cinemas, people can find select films from previous festivals on the Classic At Home cinemas website as well as ChaiFlicks, a streaming service that plays Israeli and Jewish themed movies. Eddie says that the physical festival experience is what he recommends for all audiences though.

‘We just really believe in the festival experience in a cinema and the whole shared viewing as well as shared arguing and debating after the movie. We hope people engage with the program, see things they might not have considered otherwise, take a few risks, and enjoy the festival!’

The full festival program can be viewed here.

Tickets to the 2022 Jewish International Film Festival can be purchased via the festival and Five Star Cinemas websites.