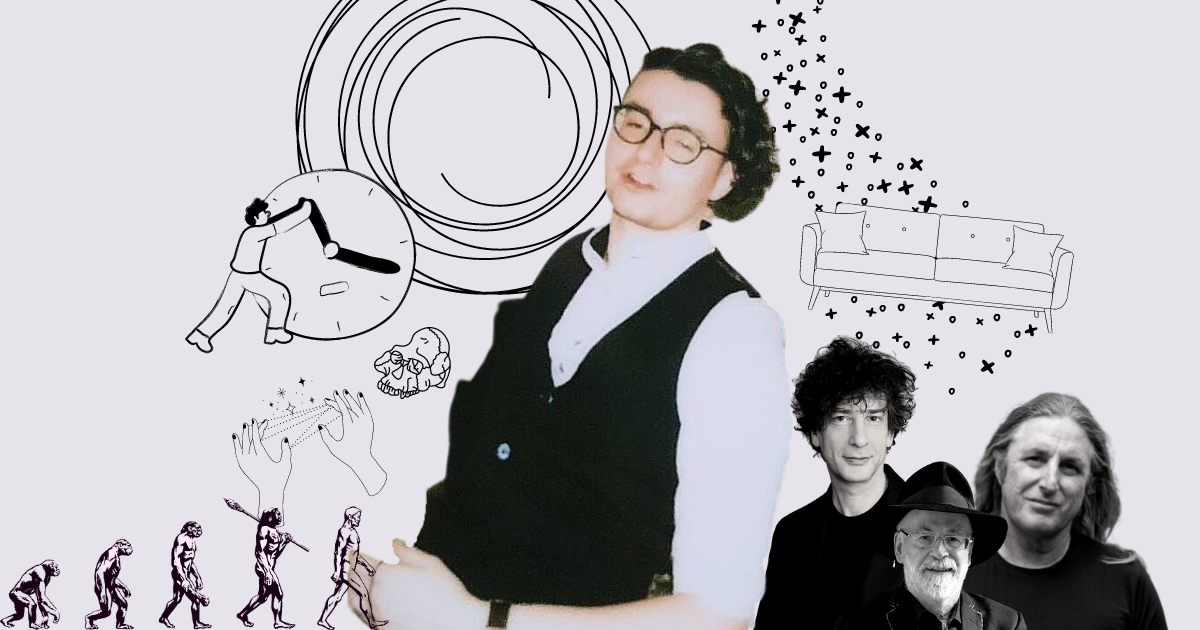 Glass Fiction Week is an annual celebration of QUT students writing fiction. As part of Glass Fiction Week 2022, we sat down with Rory Hawkins, author of Going Down, for a discussion about his writing practice. Read Rory’s story here, and submit your details here if you would like a (free!) hardcopy of Glass: The Fiction Edition, which includes all five stories published during the week.

Tell us about your writing practice.
The first thing you should know about me is that I’m very disorganised. I’m trying to be more regimented with creative writing, trying to treat free weekdays like a 9 to 5 so that I’ve got that down before I have to leave for ‘the real world’– it’s not going very well. So, I write very haphazardly; I hate hearing about how much I should be writing a day or reading a week because that just feels like something else I’ll have to over-plan to swing my mental pendulum back to something resembling organised

I used to only be interested in writing short fiction (hence entering Fiction Week) but since I started studying here at QUT, I’ve written much more poetry and memoir. I’m continuing to have fun with both – life throws you a few things that don’t fit entirely into a short story space – and I’ve found them to be great exercises in challenging how and why you write.

Where do you do your writing?
I don’t seem to be able to write anywhere that doesn’t have a desk set-up, which is kind of ironic since I write almost exclusively on my laptop. When it comes to any kind of editing, I could be lying in bed, sitting on a sofa, making lil changes to ideas on my phone if I’m out and thinking about writing later. But for properly synthesising those ideas into longer prose I need the usual table-chair situation and as few distractions as possible

I fiddle around a lot

I’m playing with a hairband as I’m writing this

That’s why I like going to uni even on days I don’t have anything on, there’s less distractions. I can write at home but our study is a shared space. It’s very cluttered so I usually end up turning a Warhammer mini round in my hands while taking too long to finish a paragraph, and at any given moment I have the option of getting up to go do something else. Because uni is also such a public place, I feel like I have to be visibly productive as well, rather than just watching YouTube too much (I am writing this at uni and have already watched YouTube, very sorry).

It’s a very sad day when you realise you might work well in the dreaded open-plan office.

What inspired your Fiction Edition piece?
I originally wrote Going Down for the Writing the Short Story unit last year, for the second assignment. I can’t clearly remember how it popped into my head, but I had this idea of a male stripper giving a businessman a piggyback while he was taking a call, and it just seemed like a very funny image. It might’ve come from watching ‘8 Out of 10 Cats Does Countdown’ too much over dinner.

A lot of my short stories or any creative writing stems from one initial mental image that I’ve tried to spin off into as many directions as possible. In this case, it’s thinking about the world that surrounds a stripper giving a piggyback and why that’s happening, what’s gone on to make this a thing that people do and if they’re aware it’s very strange (they’re not).

I think the setting of corporate dystopia naturally slotted into place with that image because the first thing it brought to my mind was how we use our bodies, and allow our bodies to be used, when we work. Crossing over the concepts of two vastly different physical jobs, a sex-worker and a chauffeur, let me think about how I could play around with how readers expect spec-fic to be more serious with what could change in the future. I don’t expect any of the worldbuilding from Going Down to happen, but I can only hope. Also, I just find unintended homoeroticism very funny.

What influences your writing?
I used to ravenously read contemporary fantasy, authors like Terry Pratchett, Neil Gaiman, Patrick Rothfuss, George R R Martin – lots of men, I know, but I’m not writing this at home so I can’t puzzle through my shelves for more examples – but I’ve put off reading as much genre fiction so I can get back to basics and follow anything with interesting or entertaining characters, people dealing with their feelings and surroundings more than suddenly being dropped in deep water.

I really should read more, but watching films instead is a lot easier timewise. Since I already watch too much anime, I like watching popular foreign films, like Princess Mononoke, Parasite, Another Round, Pan’s Labyrinth. Yes, these aren’t crazy out-there picks, but I think the reason why they’ve stood out even in an English dominated industry is because of their writing and style. Even when they might dabble in abstract concepts, it’s always brought back to how the characters are emotionally engaging with a scenario and how those themes effect their own thinking, and on top of that it’s shown in such an intuitive yet stylised way. That’s something that, across any genre I want to write in, I want to stand out with my own work. I don’t have any ambition right now to write my own script or screenplay, but well-made films really show how you can produce succinct and effective storytelling.

Best (or worst!) writing advice you’ve received.
This one’s a hybrid between a complement and advice. I’d finished a short story assignment for the Australian Voices unit, and it did surprisingly well, so I showed a friend who I peer review work with all the time. She really liked it. She said something along the lines of: ‘Wow, you should write like this more often. That was so different, your writing’s really improved.’

So I told her why that was.

Not long after, I was invited to read with some other students at an event outside uni. I wasn’t sure what to go with, so I ended up reading out an extract of the short story. Afterwards, one of the other students said to me: ‘That was really different to your work before, but I liked it. I can tell you’ve definitely improved since first year.’

A real case of déjà vu.

So I told her I was copying someone else.

That was the assignment: we had to respond to an existing piece by an Australian author. Being very unorganised and not Australian, I just picked the first name that came to mind. I read a short Tim Winton, did my best to emulate his voice and twist a few themes in on themselves. And between the grade and responses, people liked it and commented on it being such an improvement to my creative writing. But despite that, I just felt like: ‘My improvement is just copying the prose style of an award-winning author! That doesn’t help my writing sound distinct to me at all!’

What’s your biggest, craziest writing goal?
Right now, I’m channelling my thoughts towards this not-yet-completely defined concept I have for a novel, the first I’ve wanted to write in years (I’ve curbed a couple because I didn’t think I was up to it). This one is for the Swords and Spaceships unit, but I already want to continue it next year with Creative Project; it’s a retelling of the Irish Celtic myth/saga ‘The Wooing of Edain’, a tragicomedy pre-dating Christianity and preserved in three disjointed parts.

I’ve wanted to write fantasy since I was a kid but, especially in the past few years, I’ve become a bit jaded around the genre tropes a lot of commercial fantasy does, plus doing all that high fantasy worldbuilding for an uncertain number of novels doesn’t appeal to me at all. As a big Neil Gaiman fan, I’d like to ground fantasy elements within our world, so even as foreign a historical setting like ancient Ireland is, something like magical realism or even just the characters’ perceptions around the supernatural is much more interesting to me than traditional high fantasy.

Because I tend to try doing too much at once in one piece, I’m still sifting through how I want to approach retelling ‘The Wooing of Edain’. Even though I want to use magical realism to portray more fantastical elements in the myth/saga, perhaps toying with the idea of how the human race stories its histories, I still want to play literary archaeologist and research as much as I can about the Irish Celtic world. I like the idea of it becoming similar in tone to Pillars of the Earth, until Edain is poisoned and turned into butterflies or something, that is. 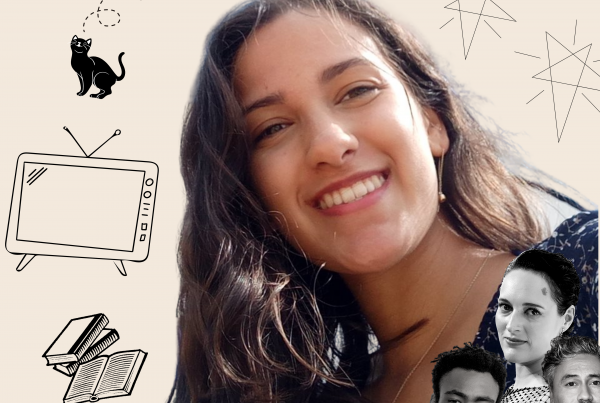 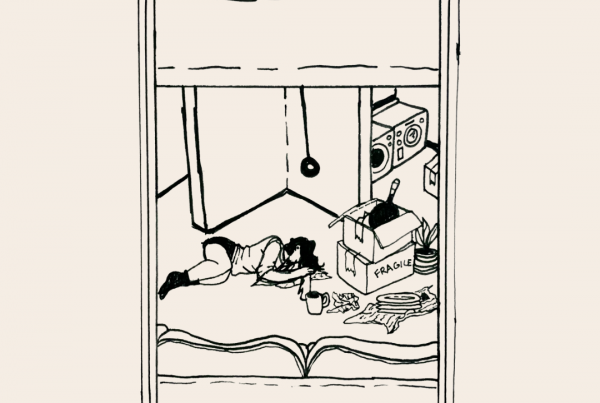