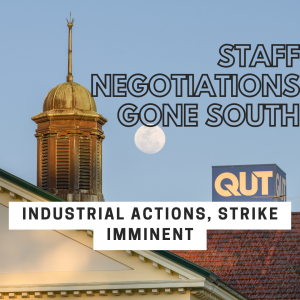 The QUT Student Guild has launched a petition for QUT students to show their support for teaching staff.

The union representing university staff has not reached a new agreement with the University, and has voted on whether or not to proceed with strike action.

The National Tertiary Education Union – the trade union representing all higher education and university employees – has now been engaged in enterprise bargaining with QUT for an entire year, in the hopes of improving teaching conditions and student outcomes.

Enterprise bargaining is the process of negotiation between an employer and employees (or their representatives) with the goal of reaching an enterprise agreement established under the Fair Work Act.

‘The poll is a formal poll that asks questions we already know the answers to,’ McNally said.

‘It’s a ridiculous requirement, and I’m extremely confident our members will vote in good numbers and approve all actions.’

‘But we aren’t able to take industrial action whenever we want to, we are required to provide management with three days’ notice – so we won’t be moving to a full-day strike in the immediate future.’

‘The legal provisions to taking industrial action in Australia are a fucking disgrace.’

In a statement released in August, at the beginning of the bargaining period, the QUT Student Guild pledged their support for staff members.

‘Staff perform 99.9% of all work at QUT, [facilitating] all student education,’ the statement read.

‘Every dollar that comes into QUT comes from a student paying for their education, facilitated by staff, or for research, conducted by staff.’

‘When staff have better working conditions, students have better learning outcomes, and the facilities we use daily at QUT operate smoother.’

The Student Guild say this decrease is, ‘affecting how much time staff can dedicate to supporting students, their other work, and their lives outside work.’

Student complaints have become louder over the past few years, and recurring issues include:

To the QUT Student Guild, these are all student issues caused by declining working conditions for QUT Staff.

‘The QUT Student Guild stands with the QUT NTEU in their EBA negotiations and supports its claims,’ the Guild stated.

‘As “customers”, QUT will listen to the students’ voice! We call upon all students to stand in solidarity with their Academics and Professional Staff and voice their support by signing this petition.’

What are staff bargaining for?

The NTEU have logged the following claims with QUT:

The QUT Student Guild President Oscar Davison believes the University’s actions show their priorities are profit and growth, not students.

‘During COVID-19 QUT sacked 337 staff, including 100 academics, despite now having 4,000 more students than before the pandemic.’

‘Staff are increasingly overexploited by universities – and students feel the hurt from these decisions.’

‘If you have happier, better taken care of, and better appreciated academic staff – students will have better learning experiences and learning outcomes as their lecturers and tutors will be more likely to want to further engage with students in their learning.’

‘We hope to work very closely with the Student Guild to ensure that students are on board and that our actions have as little impact on students as possible,’ he said.

‘We have shown at other universities that staff and students get results when they work together – like at UQ … well over 100 students came there in support of our members, a really positive message to send to staff and a strong message to management.’

The NTEU claim university management haven’t agreed to a real pay rise or major improvement in job security, which are central to their bargaining efforts.

‘Last time at QUT it was when members took industrial action that management moved on key claims and we got a good deal at QUT, so there’s no reason it can’t happen this time,’ McNally said.

‘That’s been the experience across the sector; management fucks around for as long as they like, but we get into it (taking industrial action) and it forces them to move on our claims.’

‘Staff are crying out for a real pay rise because inflation is eating away at their wages.’

‘We like to give management the opportunity to come to their senses and sign a serious agreement before any action has to take place.’

According to their 2021 annual report, QUT’s employer-related expenses have gone down by about $20 million.

The University currently has $72 million in unallocated funds, in addition to a surplus of over $138 million.

Their investment fund contributions have risen from $17 million to $115 million, bringing their total cash assets to almost $1 billion.

‘A pay increase of 4% is not going to break the bank,’ McNally says.

‘QUT is a $2 billion enterprise, and the bulk of QUT’s revenue comes from government grants, HECS/HELP etc.’

‘Other than that, it’s fees and charges which are essentially from international students who can’t access HECS/HELP.’

In 2022, QUT’s Vice-Chancellor’s salary is down from $1.2 million to $1.08 million, though this is still the 10th highest in the country and higher than the salary of the Oxford University Vice-Chancellor.

When asked for comment, a spokesperson for the University said negotiations are ongoing.

‘So far there have been ten bargaining meetings with the University, the National Tertiary Education Union (NTEU) and individual bargaining representatives,’ they said.

‘We are still in negotiations and cannot comment on various claims, however, student concerns are at the forefront of our planning to ensure we can address their needs while still providing appropriate outcomes for our staff.’ 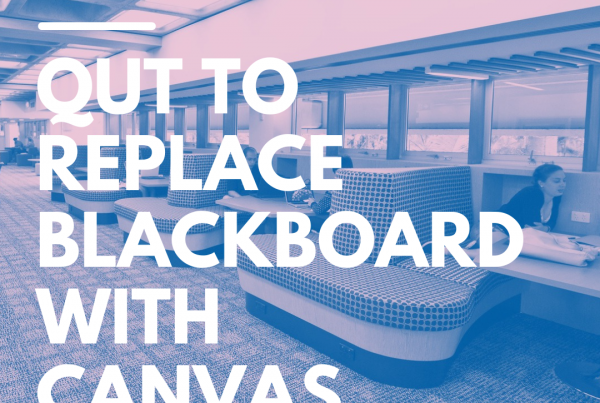