Hit enter to search or ESC to close
CreativeFeaturesFiction 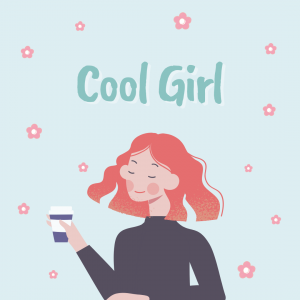 The morning sun ignites the corner of everything it touches in a white fire. You’re in the mirror, mussing your hair, swiping at the edge of your eyeliner with a fingernail. Boots laced; you take a picture in the golden hour. An eighties electro nightclub hit plays. It fills you up from the bottom of your belly to the ends of your fingertips, worms its way around your hips, dancing, swinging. A morning kitchen concert.

No one’s watching you, but you feel like if someone were, it might make them smile. The way you throw your head back laughing in the light might make their heart flip, might make them feel something. It might make you look young and a little wild. Easy going, slow-moving. Again, you change your skirt; you don’t like the next song as much, but you’ve already started performing. Even if you’re out of breath, by the time you hit the door, you feel good. You look good. Careless, windswept. You couldn’t give a damn about the fact you’re sweating before six am, nor the fact that you’re running late for your bus, nor the fact that you only got five hours sleep last night.

The bus tosses you one way, then the other. You’ve abandoned the three am fanfiction on your phone. Instead, you spread a feminist poetry book across your lap. You arrange yourself carefully; body against the window. Cool girl.

Your expression is relaxed, still, doe-eyed from sleep and the morning bright. You try to catch the eye of the pretty people who wind their way through the aisles of the bus. You try to shoot them a coy smile. Fluffing your dance frizzed hair like it’s an accessory, hiding that you don’t already want to tie it up. You enjoy the sound of your rings scratching against the plastic railing, ignoring the way the sweat chafes them against your joints. You admire the gleam of moonstone in the morning light.

Hair: across one shoulder, then the other. Sunglasses: up, down the nose. You try to pretend scrambling out of your seat at the stop isn’t awkward, that your skirt doesn’t get caught in your boots, that you don’t sound nervous and high pitched when you thank the bus driver, that the pretty woman with the lavender pants doesn’t look you up and down when you step onto the platform in a way that makes your skin crawl. Appraised, dissected.

The classroom is echoey, and your boots squeak on the linoleum. Again, you’re sweating and trying to make your pit stains look purposeful, like an accessory. Oat milk latte rattling against your thigh, trying to pretend it’s not a disappointment that you didn’t only order it because you’re so caught up in a secret language of inconsequential identifiers, the performance of being queer to make up for the very few of girls you’ve actually kissed.

You speak, loudly, over the men in the back of the room like you’re think you’re supposed to do. You think (you know?) that if you do it with enough conviction and confidence, then anything you say is correct; everything you say is right. They’ll eat half-truths out of the palms of your hands.

And when one of them shoots you a look that says ‘bitch’ without really saying it, you smile back, a full teeth predator smile. You try to pretend that your voice isn’t quivering and your knees aren’t shaking and that you really believe what you’re saying is right. You try not to concentrate on the long, aching line of your spine.

You come home. The house is quiet, twilight hour, hushed, just past four pm. You revel in the silence for a drawn-out minute, the muted sound of a roommate on the phone, the only assurance you’re not alone, not really, but the creeping watchful feeling of the city with a thousand eyes now shut out, waiting for you again in the morning.

Tiredness sets in. Three steps from the door, peeling off sweaty docs with a splash of coffee on the toe from this morning. Fuck. You tell yourself you’ll clean them. But, of course, you won’t. So instead, you exhibit them as a way to redefine your laziness as an act of defiance.

You try to peel back the layers of yourself while you strip down to your underwear. Loosen your shoulders, unclench your jaw, take four deep breaths. Let the day roll off you, stop standing up straight, stop walking like you have somewhere to be, stop flipping your hair over your shoulders, stop smiling at yourself in the mirror, easy and laidback and disingenuous like you do at pretty strangers. Stop, for a moment. Be nothing but breath.  A wisp.

Try to cool the sweat on your brow, between your shoulder blades and the breasts you’ve been struggling to ignore all day, trying to play it off. You let yourself feel all the ways you’ve been uncomfortable all day. The bone deep ache of it all. Bra off.

While the shower warms, you shove your face in the mirror. You nit-pick. The scab on your chin that has unburied itself from your makeup, fake freckles, small smudged brown dots on your cheekbones. The mascara you smudged at six am doesn’t look artful anymore. It just looks messy. You pick yourself apart for a few moments, then you put yourself back together, pretend you don’t care. You smile. No. Don’t. Stop that. You remind yourself you’re alone.

Grace Harvey is a third year creative writing student, QUT Lit Salon’s 2022 Co-President, and Brisbane based fiction writer. Her work can be found at ScratchThat, the QUT Lit Salon Youtube channel, and most places online @graceharveywrites.

Galvanising a Generation for Gender Justice: An Interview with Maggie Mackenzie of the One Woman Project