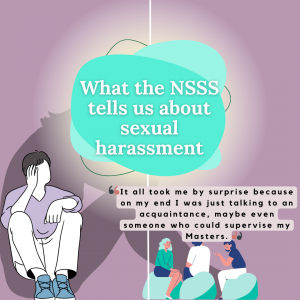 On the 23rd of March this year, Universities Australia released a pair of reports detailing the findings of their 2019-2021 survey of 43,819 Australian university students. The Quantitative report broke down into statistics the alarming rates of sexual harassment and assault on Australian campuses, among which Queensland University of Technology (QUT) ranked above the national average.

While unsettling, this quantitative report watered down into statistics the lived experiences of thousands of young Australians. The 1,835 students who voluntarily participated in the second – ‘qualitative’ – report, were given an opportunity to tell their stories of victimisation and survival, but perhaps more importantly, to be heard.

‘In Australia, 1 in 5 women and 1 in 20 men over the age of 15 have experienced at least one incident of sexual violence, with 1 in 2 women and 1 in 4 men having experienced sexual harassment,’ the report opens, echoing the findings of the quantitative report.

The anecdotal and personal accounts within the report point to a series of trends when it comes to sexual misconduct in Australian universities.

One international student was repeatedly harassed by a non-academic university staff member during her time on campus. The staff member sent her unwanted texts commenting on her appearance and stereotypes about women from her country of origin. As a woman from a culturally and linguistically diverse background, she was unsure she would be listened to if she reported the staff member to the university. While shame and stigma around her experience reinforced her reluctance, she proceeded with bringing the issue to her university.

‘Two weeks later, I was told by the Head of Department to block the phone number of the accused and asked to no longer attend school seminars or social events as no one could guarantee my safety from this person,’ she told the NSSS. ‘This occurred over two years ago and since then I have not attended an academic seminar on my campus.’

Multiple accounts noted that stalking and inappropriate questioning had become commonplace parts of their university experiences, one student even being asked about their sex life by a bus driver when he drove them around campus late at night. Inappropriate comments of racial and sexual natures were also noted by multiple respondents to be levelled by staff members more often than other students.

But many experiences of sexual harrasment in the post-Covid world occur online. One respondent recalled a time when a group of unknown men gate-crashed a Zoom and asked different women to flash. Another respondent said one student told them, ‘she enjoys listening to my assignment presentations when she is feeling sad. She has also repetitively followed me to my workplace and outside of the university premises.’

One account from a queer man and one from a queer woman were the only instances included in the final report of the dynamic not consisting of a male presenting assailant harassing a female presenting person. This is consistent with the findings that university environments tend to perpetuate existing cultures of male sexual forwardness, with many instances originating or even continuing in online spaces.

One respondent recalled a specific incident,

‘Soon after our initial conversations he started emailing late at night saying that he had “stalked my social media pages” and proceeded to ask me questions about my relationship status. I was a little concerned but thought that… he was a teacher after all, he was nice and didn’t seem malicious, so why not? However, this only prompted more questions and a discussion about his love life and failed relationships, as well as him giving me his personal phone number and telling me to call him anytime and that he is usually up late. I expressed that I wasn’t interested in a way that I thought would be both respectful and also protective of the fact that he was still my teacher at this point, and he didn’t take it well. He told me that I had wasted his time, that he “was getting old and grey and didn’t have time to waste” … and that I should not have been talking to him if I wasn’t interested. It all took me by surprise because on my end I was just talking to an acquaintance, maybe even someone who could supervise my Masters.’

Many instances of inappropriate comments and behaviour by university staff were included in the report, such as teachers and security.

‘Because I study art, I have access to a private studio,’ one student said.

Another student noted that they now exercise much more caution when interacting with teachers, as a result of, ‘how that one esteemed staff member treated [them].’

They continued, ‘I am cautious and do not generally speak to my teachers outside of class as I once did.’

Many students reported having either at some point or permanently discontinuing studies because of assault. It is often the friends and/or roommates of survivors are the first point of disclosure and potential support for many student victim/survivors – the majority of whom do not report to police or their university. These ‘informal helpers’ can have the most impact on survivors, as their initial response to receiving a disclosure has the capacity to be either validating and supportive, or to induce a secondary victimisation if the survivor is left feeling shamed or disbelieved, the report noted. Research cited by the report also demonstrated that being an ‘informal helper’ for someone who has experienced sexual violence can result in distress for the person receiving the disclosure, particularly if they themselves are not sure how best to respond.

These ‘informal helpers’ need to be called upon because reporting processes in Australian universities are inadequate, outdated, or non-existent. One survivor of sexual harassment and assault perpetrated by a university staff member responded to the Survey.

‘The staff member copied her phone number and sent unwanted texts about her appearance, as well as leaving gifts on her desk and constantly visiting her office. They accused her of ‘playing hard to get’, as well as addressing her using racial stereotypes. When Amina mentioned these incidents to another staff member, they said that she should feel grateful for the attention. Amina said that she was unsure about whether reporting the perpetrator would be worthwhile. She felt that as a first-year student originally from a rural background, her lack of support networks in Melbourne would make the process difficult. Amina also found that it was hard to establish how to report the sexual harassment and sexual assault, especially given that the staff member that she initially told brushed off the experience. However, she followed through with the reporting process and the perpetrator was terminated from their role – she found that this was sufficient action and felt reassured that she would no longer see the perpetrator on campus.’

Many other respondents lamented that they were either not believed by institutions, family, or friends, or they weren’t taken seriously by their university, with little to no consequences ever implemented.

One student said, ‘The only way anything could have been implemented was if I sat down and addressed the man in a meeting, with both of us saying our own version of events to each other. The idea of facing the man who had hurt you and then listening to his version of events is not remotely compassionate or reasonable, so no action was ever undertaken. I was also told in detail how great this man was by staff mid-way through my meeting [where I was asked to explain] what he had done to me.’

A significant number of respondents also criticised the culture that exists around discussion of sexual assault. Many students did not realise until much later that what had happened to them was assault or harassment, by which time meaningful action could no longer realistically be taken.

‘The culture needs to be addressed,’ one person said.

‘I have overheard men saying vile, and derogatory things about sex with women. The college setting perpetuates rape culture, and online consent modules depict sex as so cartoonish that men dismiss any lesson they could learn from them regarding “ambiguities” of consent.’

If this article has raised any concerns for you, please know that help is available.