Hit enter to search or ESC to close
Articles

To find out about the candidates in your electorate, read on in Part 2 of Glass’ election explainer.

For the politically inclined, feel free to check out our survey. We want to know what you think! 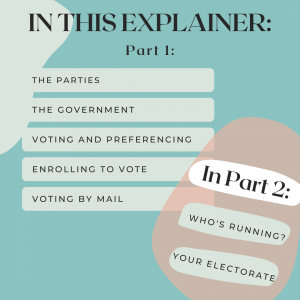 The Federal Election is upon us. Finally.

Held once every three years, the Federal Election is Australia’s chance to have their say about who should run the country and what issues should be prioritised for the next three years. The election will take place on the 21st of May, which might seem like a long time but will be upon us like a flash, so make sure you have enrolled to vote!

Government is formed when a party, or a coalition of parties and independents, has a majority of seats in the house of representatives (the lower-house). The government since 2013 has been controlled by the coalition of the Liberal Party and the National Party – in Queensland, these parties have merged, so they will be on your ballot paper as Liberal National Party.

The key opposition party is the Labor party, who have previously held government on only a handful of occasions since World War 2. Minor parties (parties who are unlikely to be able to hold government on their own) include the Greens, The United Australia Party, The Liberal Democrats, and One Nation. In some electorates, there are even more parties contesting seats.

The Australian Government has an upper and lower house called the Senate and the House of Representatives.

The Senate comprises 76 senators, 12 from each state and two from each territory. They represent the entire state or territory. Queensland currently has five Liberal-National Senators, three Labor, two One Nation, and one Greens. Because Senators are not all elected at the same time, three Liberal-National seats, two Labor seats, and one One Nation seat are up for re-election in 2022.

The House of Representatives has 150 Members. Each electorate has one person to represent them in Parliament, and these are all re-elected during a federal election. For example, Brisbane is an electorate, and this seat is currently occupied by Trevor Evans as of the last election.

A government is formed when a party or a collection of parties (a coalition) gain a majority of the seats in the House of Representatives (76). You can read more about the electorates near QUT, here.

Candidates are listed in a random order on a ballot paper with a box next to their name. Thes boxes must be numbered in order of most preferred to least preferred. If your first preference is unsuccessful (for example, they finish 5th out of 5 candidates for your electorate) your ballot is reallocated to your second preference. This process is repeated until there is a winner.

Here is a resource to help understand preferential voting

This might seem difficult, but this actually allows people to vote for more candidates as their first preference without wasting their vote. Under this system it is impossible to waste your vote, and Australian democracy can thrive.

At the voting booths, you’ll be given two pieces of paper with boxes to number. The upper and lower house each have a ballot paper and voting is a little different for each.

For the House of Representatives, you’ll see a list of candidates for your electorate in a random order. If there are five candidates, you must number them from 1 to 5 – 1 being most preferred, 5 being least preferred. You MUST number every box.

Political parties like to hand out how-to-vote cards which suggest how they’d like you to preference the other candidates. You DO NOT have to follow their suggestion.

Not sure where you stand? The ABC creates an issues-based voting tool called Vote Compass for every Australian election. This can be especially helpful for first-time voters.

If you are completely new to politics, The Political Compass is a similar tool that breaks down politics more broadly.

If you have never voted before you MUST enrol to vote before April 18th. If you aren’t sure, or need to check your enrolment details, follow this link.

Mail-in voting became widely known during the Covid-19 pandemic around the world. Despite what you may have heard, mail-in voting DOES NOT undermine the electoral process and is completely safe. You can vote by mail prior to the election date, and more people are eligible for mail-in voting than you think. To vote by mail, you have to apply here.