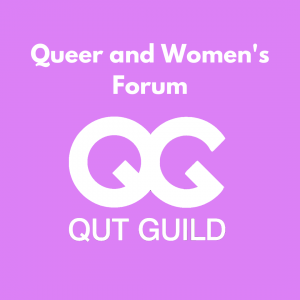 Representatives of the QUT Student Guild and the Women’s and Queer collectives met with students for the Queer and Women’s Forum on Wednesday evening April 28th for what was a casual but important discourse on the safety and access of marginalised groups on campus.

And there was a lot to be positive about, including the ongoing successes of Little Emergencies,  the Kelvin Grove Lounges, and the expected expansion of these projects to include a greater range of products and two new lounges at Garden’s Point campus.

But discussion quickly shifted to how students felt QUT was failing them in terms of campus safety and access to services for gender diverse people.

Campus safety dominated the discussion, with many students feeling uncomfortable approaching security — who themselves seem not even to be present on campus after dark.

One attendee pointed out that visibility is extremely limited on campus.

‘There is almost no visibility between the campus and the carparks,’ she said, adding that there are also, ‘too few emergency … buttons.’

The fact that the Night Shuttle even existed was a revelation to most when one attendee brought it up.

The limited knowledge of the service was particularly concerning given that at Kelvin Grove it only operates on a ‘hail to ride basis.’

Queer issues were also at the forefront of discussion, in particular the suggested Queer allyship program for staff in the form of a compulsory training module, which is currently sorely lacking.

It was also raised that similar opportunities for students are so poorly advertised that they generally don’t become aware of these until they have nearly graduated, if at all.

Sargeant noted that the University tends to value optics over action,

This issue of optics also affects systems at QUT, as was noted by one forum member who pointed out that the current ID card name change option doesn’t change one’s name on enrolment and doesn’t change gender marker, leading to the devastating reality of students graduating under their deadnames.

QUT is updating this system, but the expected timeframe is believed to be three years.

It was also noted by Queer Collective members that all-gender bathrooms only exist in one block at Garden’s Point, although it was acknowledged that updating every block would be a significant infrastructural change.

Alternatives were brought up, such as bathroom labels only saying whether the bathroom had a urinal, but this was flagged as something that could potentially out transgender people.

Hitzke suggested that, given library bathrooms are usually single rooms, they could simply not be gendered at all.

The Guild and Collectives also received constructive feedback, particularly in relation to how accessible some events are for people with disabilities when they are only advertised on Facebook.

Also discussed was the potential to make some events and spaces feel less public, so that students would feel more comfortable participating.

Some in attendance also said they felt less comfortable going to the Botanic Bar in light of a recent spiked drink.

Hitzke said the Women’s Collective is looking into test strips for the campus bars, while making a point to note that it is sad such action would even be necessary for student safety.

Overall, the executives were pleased with the response from attendees.

‘I’m really happy with the engaging people who attended our forum,’ Hitzke said.

‘I know it can be hard to speak on the difficult topics we covered, especially safety on campus … I really appreciate everyone being open and honest with us.

‘It’s raised to my attention students’ relationship with security at QUT and has showed me that I need to form a relationship with that team so we can make QUT a safer environment for everyone, especially at night.’

Topics of Interest to the Queer and Women’s Forum

QUT operates a regular night shuttle bus service run at both Kelvin Grove and Gardens Point. It is designed to get you safely to your car or nearby public transport.

For more information can be found on the QUT website.

The Little Emergencies program is run the Women’s Collective and allows students to access free pads and tampons from five different locations at Garden’s Point and Kelvin Grove.

The collective is currently looking to expand the products to include liners, more sizes, and more locations. The Women’s Lounge also has emergency underwear.

The QUT Guild Queer Collective provides free, high-quality binders for trans and gender diverse students in need. Email queer@qutguild with your name and size requirement. All enquiries are confidential. Sizes medium and large available, with more to come.

Petition to Recognise LGBT+ people within the Births, Deaths and Marriages Registration Act

QUT Graduate Esther Vale is behind a Queensland Parliament petition that has garnered almost 10,000 signatures in just over a week to recognise people by the gender they identify with, removing the requirement for a person to undergo sex reassignment surgery to change the sex listed on their birth certificate. A bill will be introduced into State Parliament later this year as a result of Esther’s organising.

In 2021, the QUT Guild initiated their first queer-centric support group: Home. Home is a support network for young trans and gender diverse students, run in collaboration with QUT counselling services and QUT Guild Queer Collective. Their first in person meetup will be announced soon.