I hid my queerness through high school. It shouldn’t still be this way. 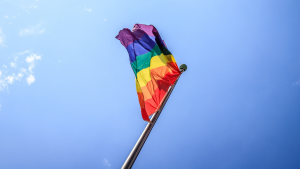 I remember the pure isolation I felt in my year eight classroom. It was ten years ago now. When we were asked to show the class a video and analyse its themes, I chose the music video for ‘Beautiful’ by Christina Aguilera. The video famously shows two men kissing, some of the most overt queer representation I had seen in my twelve years. It was an embrace not clouded with shame or stigma; they were just together. Their embrace was so foreign to me but felt right. When we reached this part of the video, their embrace, my classmates laughed. Broadcasting a queer couple on the whiteboard of a Catholic regional high school was not the norm. I don’t blame my classmates for laughing; they were echoing the cultural sentiment of our environment.

I remember welling up, stumbling through my presentation, chin shaking. My teacher didn’t condone my classmates’ actions, but she didn’t stop them either. I couldn’t explain why I was so emotional. I didn’t have the words to articulate it. Eventually, I was excused. I sat on the steps outside our classroom, where the first girl I had a crush on came and sat with me, unaware of what her presence meant and why she made me cry more. I spent the next two weeks convincing every student who asked that I wasn’t gay. That experience led to me proudly branding myself as an ally at school, but not queer. Never queer. I knew I was lucky I didn’t get outed or experience violence; I had the privilege of passing for straight in my situation.

I can guarantee you that someone at Citipointe Christian College is just like me.

In the past fortnight, we saw Citipointe’s principal Brian Mulheran put forward an enrolment contract called ‘homosexual and bisexual acts’ a sin, suggesting they were akin to bestiality, incest, and pedophilia. Citipointe has since withdrawn the contract after mounting community pressure and the collation of over 150,000 signatures against the school’s actions. Principal Mulheran has stepped aside, albeit temporarily. There are calls for the school itself to be overhauled systemically.

The damage has already been done for the queer students at Citipointe, like me at my old school. While some may argue that Citipointe’s school culture may have always been covertly homophobic, there is a different kind of mortification when the quiet part is said aloud. The systems that made me choose to hide my queerness at my school are magnified at Citipointe Christian College.

My story is one of thousands that queer graduates of religious schools across the country have lived through. When we leave that environment, it is transformative when we enter spaces with queer cultures for the first time. One of those places, for me, was university.

My queer identity grew at university in a way that it could never have back at school. While I had the support of my mum and sister back home, university is where I started meeting queer people. I remember being at the QUT Literary Salon for the first time, hearing someone read a poem about them and their girlfriend. I remember the presence of the Queer Collective, their radiant pride in the Kelvin Grove courtyard. I remember sitting off-campus bar with my friend Zak, telling him that I liked women—my first friend I told. I remember using the confidence I built at university to explore other queer spaces in Brisbane, places that I still exist in and learn from now. Queerness brought me peace in a way religion never could, never wanted to. I now identify as gender-diverse and bisexual, and I feel welcome in my communities now that I’ve graduated.

The way I came to my identity is not as clear to the students of Citipointe and the other schools around the country that have the same sentiment but aren’t arrogant enough in their bigotry to put it into an enrollment contract. Discouraging and stigmatising queerness and transness en masse causes more damage than one might realise. In a schooling institution like this, queer students are taught to fear their true selves, and their straight counterparts are taught to ostracise queer people on a systemic level. Students should not have to suffer through their schooling years before they get to live freely. Struggling to come out, doubting the validity of your queerness, not being sure if you’re queer enough, fearing the retribution of your family members, fearing the loss of your community, internalising your misogyny, masculinity, and homophobia are all examples of unnecessary religious trauma being inflicted on children to appease a political agenda.

For those doubting the political nature of this policy, please note that Brian Mulheran made his schooling staff pray that LNP bills would pass in 2021.

As I have been writing this, the Religious Discrimination Bill (RDB) has been taking up precious hours of the ten sitting days of Parliament before the election. The Bill has been designed to protect contracts like Citipointe’s on a federal level. It is a bill that fails so many queer Australians by its very existence. It passed the lower house with a measly amendment to protect queer students and teachers (but not trans students) in the wake of the Citipointe controversy. I saw my friends reach out to one another, share suicide hotlines, send messages of hope and fear and anger and frustration. However, it was tabled to make room for the budget’s sitting requirements at a pivotal final moment. So it won’t pass before the election is called. This does not bring much relief.

I deserve to be protected as much as those at Citipointe deserve to be protected. We deserve to feel safe entering schools, universities, and workplaces without the fear that bills like the RDB that Scott Morrison championed will diminish the progress we have made. The sentiment of the LNP is not coming back, it has always been there, but it is louder now. The phrase, “come on, it’s [insert year here]”, becomes less and less of a rallying cry with each year that passes. Come on. It’s 2022.

Queerness being questioned is not new, but it hurts each time. The past week has been exhausting, fearing the worst. I have been trying not to sound frustrated when I say that protections from discrimination should be the standard everywhere, that we should not have to fight for them yet again, but the truth is I am frustrated. I am angry that after years of affirming my identity, I feel reduced to the same wobbling chin and stinging eyes I felt in my year eight classroom. This time I have a community to rally around. The students at Citipointe have a community ready to rally for them. It should not be this hard anymore.

As we wait for an election, wait to see whether or not this Bill will be picked up from the Senate room floor after said election, I do feel comforted by two things: the community around me, and my vote.