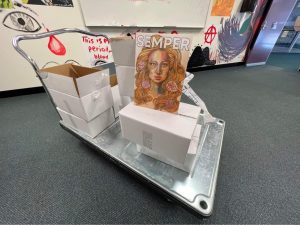 Opinion – talking about class in print is important.

Note: this article does not necessarily reflect the opinions of the entire Glass editorial team.

The University of Queensland Student Union newspaper’s recent article, The Subtle Art of Shoplifting, is facing a brigade of criticism that is altogether misplaced, unrealistic, and grounded in the shared non-reality of the well-off.

UQ’s Glass analogue Semper Floreat has come under fire in the last week for publishing an article offering tips for would-be shoplifters. The decision to publish the piece has been covered on the front page of the Courier Mail, as well as by Nine News, 7NEWS, and the Daily Mail, among others.

The article itself is fewer than 300 words long and includes fairly mundane advice, all things considered, and the print version was about 1,000 issues.

So, why the pearl-clutching? Is this targeted, mass-media response really justified – and if so, to what end?

The goal of the mainstream coverage of the article surely hasn’t been to suppress the advice within. The media-driven interest in the piece has seen The Subtle Art of Shoplifting be viewed over 4,000 times on the Semper website in just three days, more than four times the usual number for a popular article. Both Nine and 7NEWS have unsuccessfully sought television interviews with Semper editor-in-chief Billie Kugelman.

Across the world, as cost of living pressures increase, young people and students (I.e., Semper’s readers) are disproportionately affected. Forget buying a house, buying food while making rent has become a stretch for many.

The publication of a shoplifting guide could have sparked a conversation about the injustice of needing to steal to survive and of having to weigh up between committing a crime or feeding oneself.

However, in writing for the Courier Mail, Samantha Scott describes Semper’s article as deliberately ‘encouraging’ people to steal.

‘The University of Queensland’s historic student newspaper is under fire for encouraging people to shoplift, publishing a provocative guide detailing strategies to steal without getting caught,’ Scott said.

‘The latest edition of Semper Floreat, which has been published at the prestigious university for 90 years, also features an expose calling for the abolition of police and posing the question: “Why are the police so f—ed?”

‘The paper, which is funded by compulsory student union fees, defended the articles, which have sparked student anger.’

But the thing is, the article doesn’t explicitly encourage brazen theft, and to claim that it does is deliberately misleading. Aside from the tips themselves, the piece reads as follows:

‘Frifting (free shopping) is a legitimate action for the working class to take in ongoing class war. Staying above the poverty line, for many, is a full-time job.’

‘Be sure to target large corporations and not “ma and pa” joints, take what you need, and even what you can (giving to others in need), or at least turn a blind eye…’

The article then offers some fairly basic shoplifting tips (not 15, as Nine News incorrectly reported) before adding:

‘Semper Floreat does not endorse illegal activity, but recognises that breaking the law is sometimes a human right.’

The fact is, no matter which way you try and read it, The Subtle Art of Shoplifting

2. only ever encourages theft from large corporations, and

3. specifically doesn’t endorse criminal activity except when in compliance with human rights

So, what’s got everyone so upset?

Sure, it can be said that the decision to publish shoplifting tips at all verges on encouragement, albeit indirect. But the article actually, clearly and unapologetically, endorses the twin ideas that the action of stealing is legitimate and that class systems exist that necessitate theft for survival. Self-checkout self-help alone won’t get you on the front page of Queensland’s outrage machine – but this sentiment will.

I can also certainly attest that Scott’s second-sentence tangent into police abolition and later note about compulsory student fees are inconsistent with any journalistic style I have ever been taught. The politics of stealing to survive are obviously terrifying to those at peace in the status quo.

But does stealing hurt other Australians?

No, not really – but the Chief industry affairs officer for the Australian Retailers Association, Fleur Brown, says that shoplifting is expected to cost businesses billions of dollars this year.

What Brown fails to note, though, is that studies attribute this loss mainly to large corporations, who have been able to implement self-service checkouts – at the expense of wage-earners – in the retail industry. Semper’s second commandment – be sure to target large corporations and not “ma and pa” joints – hardly threatens a struggling business. Speaking to 7NEWS’ Garth Burley (who himself assures us that ‘we all pay the price’ for shoplifting), Brown decried any encouragement to commit a crime as ‘irresponsible, under any circumstances.’

The comparison of survival shoplifting and business bottom lines is a truly monstrous consequence of the ahistorical, mythical idea that capital will trickle down and that stealing from the rich is really just stealing from the poor. Pitting a starving person against a supermarket and asking us to choose an imaginary, non-human entity over a vulnerable member of our community is barbarous, inhumane, and ultimately sets a far more horrific precedent than the publication of shoplifting tips will ever manage.

In response to the manufactured uproar, Queensland State Education Minister Grace Grace described the article as ‘ill-conceived’ and called for its withdrawal, which is rich given the Queensland Labor Government’s alleged commitment to combatting the cost of living pressures in the state. Her opposition counterpart, Christian Rowan, agreed with her, suggesting that these publications could see Queensland end up in a ‘situation of anarchy’.

It’s lovely to see, in a rare and beautiful moment of bipartisanship, our politicians coming together to speak up for the rights of private capital at the expense of the most marginalised.

Multiple media outlets have now, in a deleteriously one-sided manner, aligned themselves with common myths to contort popular outrage inward instead of outward. I challenge you to ask yourself why you look at shoplifters with such disdain and who benefits from that disdain. Because it’s not workers, it’s not manufacturers, and it’s certainly not the most desperate among us.

Our UQ counterparts find themselves in hot water after a “how-to-shoplift” guide sparked outrage. Reflecting on my own experience as an editor of a student newspaper and the recent experience of our own guide, “where-to-steal-plant-cuttings”, angering QUT, I have to take the side of the Semper editors. The Subtle Art of Shoplifting is provocative, engaging, precise, and timely. Had it come across my desk, I would have published it too.