Hit enter to search or ESC to close
ArticlesNewsQUT Guild 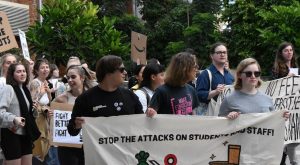 QUT Education Action Group members lead protesters behind the chancellery building at Gardens Point chanting, “Margaret Shiel is a corporate shill,” 25th of May 2021. Shiel’s $1.2 million salary makes her the highest paid vice-chancellor in the state.

Dozens of Queensland University of Technology students gathered outside the Chancellery building at Gardens Point on Tuesday the 25th of May to protest against university budget cuts they believed to be detracting from the quality of their education. 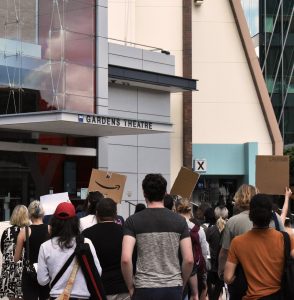 QUT students march past the Garden’s Theatre at Gardens Point campus, on the 25th of May 2021. The theatre has been scheduled for demolition since before the pandemic and while unavailable to students, remains available for external hire.

The newly founded QUT Education Action Group, affiliated with campus club Socialist Alternative, collaborated with the QUT Student Guild to organise a formal protest on the steps of the Chancellery building in response to severe cost-cutting measures, including staff layoffs, recycled learning content, and the dissolution of the Dance Performance major.

Event co-MC and principal organiser, Sel Dowd from the Education Action Group opened the speaking with an acknowledgment of country, before suggesting QUT have hidden behind the ongoing pandemic to justify excessive cuts.

“I think it’s important we push back on this rhetoric about QUT crying poor,” Dowd began, before noting that QUT say, “job losses and cuts have to happen, that Covid [-19] means we should accept that … because there’s no money in the system.

“Our universities today are run more and more like large corporations, and like other corporations, the executives are on six figure salaries.

“QUT sits on more than $2 billion in assets, and hundreds of millions in endowments and investments. QUT also made a $23 million operating surplus last year alone [spending] $10 million renovating this building to add a private bathroom”

Student representatives from Creative Industries, Education, and Science and Engineering all spoke, including a second-year education student, Isabella, who condemned the online learning model.

“Discussion surrounding online education has changed to fit their narrative,” Isabella said, adding that this practice is, “shameful and appalling”.

One member of both the QUT teaching staff and the Education Action Group expressed the concern of overworked staff, suggesting that staff voices are not heard by QUT and that unpaid hours are rife within the university.

Also among the speakers was Stephen Bates, the federal Greens candidate for the seat of Brisbane,

“It is fundamental to our society that we value education and create quality graduates,” Bates said.

“The more they cut, the louder you need to shout.”

Protesters began their march through the campus outside Garden’s Theatre, the use of which was recently denied to Dance students by QUT, despite having hosted a private conference for Rio Tinto the week prior. 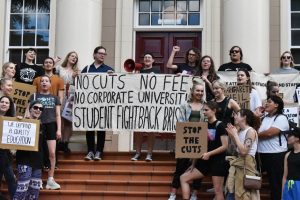 Socialist Alternative organiser Sel Dowd leads assembled protestors in chanting, “Margaret Shiel get off your toilet,” at the steps of the chancellery at Gardens Point, on the 25th of May 2021. Security shut the doors to the building to prevent any possible attempt at entry by the protestors.

An organiser from the Student Guild, Sarah Balmer, was excited by the response from students.

“In my classes in first year, there were endless opportunities to engage with both teachers and peers.

“Now, those opportunities need to be sought out and in many cases are not available at all.

“I think the chance to chat to a lecturer after class has been undervalued … at least in Law, with all virtual lectures that opportunity is now virtually non-existent.

“I am hopeful that QUT will consider the students first and foremost in their decision making, as opposed to their bottom-line.”

However, while pleased with the turnout, Balmer had some concerns about the general conduct of her co-hosts.

“I think any student action on campus has a positive impact on students because it will hopefully start them thinking,” Balmer said.

“I have some concerns that Socialist Alternative’s presence on campus alienates many students in their combative approach to students entering the campuses.

“They are well intentioned, but I do not think it is always well received.”

Bates also praised the turnout, adding that he believes education is the right of all people in Australia, regardless of their stage in life.

“Education is one of the keys to breaking the cycle of generational poverty,” Bates said.

“Making all levels of education universally accessible is a no-brainer to me.

“This means funding our public schools properly to make them the best in the world, and making university and TAFE free again.

“Youth Allowance has been gutted, Rent Assistance is minimal, and textbook grants are loans.

“It puts [students] under financial pressure as well as academic pressure.

“Universal higher education only works when we give people the financial security needed to study and succeed .. we want an Australia with the brightest minds we can have.”

The QUT Student Guild recently awarded the university a “FAIL” grade for their handling of student welfare during the COVID-19 outbreak.

This came after 78% of respondents to a Guild survey stated that they wished to attend on campus classes this semester, despite the University opting for more online learning options.

In a statement at the beginning of the semester, the Guild said that, “not only was there a distinct lack of consultation with the student body on these changes there was also a stark difference between what QUT is publicly saying and the experiences most students are having.”

Students should feel comfortable in bringing any issues they are having with their studies to the Guild. Hearing and acting on student concerns is one of the most important parts of my role, and it is one of my favourites. Just email me at studentrights@qutguild.com and I will do everything I can to help.

There are a few ways students can contact me. I am working full time in my retail job while also campaigning but I will always respond. You can reach me via:

I plan on encouraging community consultation forums as well. There definitely seems to be interest in hosting one on tertiary education reforms. If people are interested in this, email me and let me know!