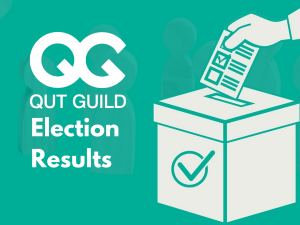 Reach has won twenty of a possible twenty-four positions on the Student Representative Council (SRC), according to this morning’s provisional declaration of polling from the QUT Student Guild.

Oscar Davidson was elected President of the 2022 Student Guild, beating Left Action‘s Sel Dowd in last weeks election, and will be joined by Vice Presidents Aanma Asif (Secretary) and Victoria Barns (Treasurer), who were unopposed.

While Davison said he expected Reach to be successful, he was still holding his breath until the end of vote counting this morning.

‘I am incredibly humbled by the result of the election,’ Davison told Glass in a statement.

‘I am so proud of everyone in Reach … everyone worked so hard campaigning.

‘It’s lovely that QUT Students trust the team we have put together; they will be fantastic.’

Campaigning on a platform of progressive values and experience, Reach has now been in control of the Student Guild since 2019.

Davison said the job for the elected officers is now to get students back to in-person learning.

‘We need our lecturers and tutors back,’ Davison said, adding that there is no, ‘decent contact with tutors.’

‘Our job as the Guild is to make the University experience better for our students.

‘We’re at University to receive a top-quality education, and that is not happening.

‘[We want to] restore QUT as a top-quality University.’

Presidential candidate Sel Dowd said Left Action will continue to organise against ‘undemocratic changes’ to the structure of the Guild.

‘Left Action are happy to have some representation in the Guild’s new Student Representative Council body to hold Reach accountable next year,’ Dowd said to Glass.

‘We’re ready to take the fight to the senior executives of QUT whenever they try to make staff and students bear the burden of their crisis, and keen to get more students involved in the fights against racism, for refugee rights, for LGBTI rights and more.’

Also elected were seven delegates for the National Union of Students (NUS), comprising five members of Reach and two members of Left Action.

Dowd hopes that their NUS delegates will be able to throw their weight and resources behind, ‘defiant, activist campaigns that want to educate and organise students in our numbers.’

The results of the provisional announcements are subject to any appeal by the election tribunal.

Also elected was Juval Stephens, who will sit on the QUT Guild Board and the independent media team – both of whom were unopposed.