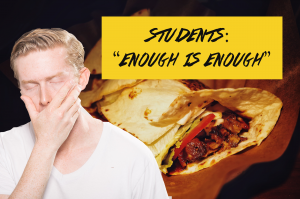 A student whose regular lunch plans for the semester have been thrown to the wayside by the announced closure of GYG Garden’s Point delivered an impassioned plea to Gazette staff this week to help spread the word about the need to take action on the closure, saying “Sad reacts and memes are not enough.”

Jerrey Haggard, 21, organiser of the proposed hunger strike, and about three other students plan to protest outside QUT Retail headquarters in the inner-city Campus.

“After the impact of losing the Albert Street store, Lock Stock Salads, and only just getting the famous QUT GYG back after COVID, your kicking students when they’re down already.” Mr Haggard said.

“I want action. There is clearly a healthy takeout closure crisis within Brisbane.”

Haggard intends to garner a crowd starting by tackling the issue at the core within QUT.

He encourages student activists and hungry students alike to take part. Mr Haggard also said QUT Retail and GYG were “hurting hungry students” with their callous announcement and little explanation on the closure. “The sadness found on Stalkerspace 2.1 is immeasurable”, with one student commenting, “Where do they expect me to get burritos now? Zambreros at KG? It’s just ridiculous.”

The Gazette and Mr. Haggard aim to keep you posted on the planned hunger strike date.