Hit enter to search or ESC to close
ArticlesGuild News 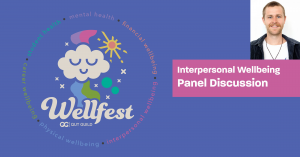 As a part of the QUT Guild’s Wellness Festival, Glass are getting in touch with some of the professionals visiting QUT. Interpersonal health week is coming up, and will feature Al Green from The Man Cave.

I caught up with Al to talk about interpersonal health, young people, and Wellfest.

How did your background in Drama and arts affect your development as a man?

For me in high school I went to an all boys private high school. I had a good time while I was there but generally felt pretty limited in terms of expression and anything different. I played a lot of sport but wasn’t a sporty kid, and I couldn’t really find my place in school. I was a bit of a social chameleon and spent a lot of time in different groups and thankfully stumbled across the drama department in year 7. I did my first Shakespeare play and I felt I was in a space and I’m allowed to be different characters and different people and in improv, I’m allowed to just give it a crack. If you muck it up, its all part of it. Whereas those behaviours and experiences anywhere else in school you can get put down for it pretty easily.

Everything else is about putting things in, whereas Drama is about bringing things. One thing we talk about a lot at Man Cave is the origin of the word educate; in Latin it translates to ‘to bring out’, or ‘to bring it out’. I think that’s a really interesting concept because school and society is about how much can we put into people, whereas true educators are people that can bring out the unique genius of people.

Why do men need so much additional guidance outside of traditional institutional structures?

I have a lot of issues with how the education system has been created. It works really well for a certain percentage of people but it doesn’t for the majority. The older I get the more and more baffled I become that there isn’t at least 25% of our education about learning who we are, what is the self, and how do we relate to those around us. We stumble through these as were older. How is that not apart of our education system?

Young people know a lot of things, and a lot of information, but too much is rote learning. I’m not saying that maths and English aren’t important – they are. But it is way too stacked in one direction. Young people are being handed a really challenging world right now and they feel like they’re needing to solve that. We aren’t giving them the tools to work out themselves, to then work with each other.

How do young men usually react to your workshops?

Our big focus is a full day workshop. The first third of the day is just about getting boys onside and really powerfully meeting them where they’re at, understanding the school environment they’re living in. Everything at our workshops are done by choice and we never make a young person do something they don’t want to do. If young people don’t feel comfortable being in the space, they’re welcome to leave. But the thing I’ve found with boys especially is it’s not that they don’t have stuff going on or don’t want to talk about it. It’s usually one of three things:

1. They have never had a space where it has felt safe to talk about how they’re feeling

3. They don’t have the emotional language to talk about that, which again is why I think the Drama department is such an amazing area because you learn the language to explore human condition.

In school workshops we get boys on side by doing it first. Everyone knows the saying: you can lead a horse to water but you can’t make it drink, and I think a lot of the world right now is trying to force boys to drink. We don’t try to do that, but we think we can make the horse thirsty. It can take a little bit of time; every group is in some way the same, and in other ways completely different. So it’s about taking time and rightly so; boys need to know that they can trust us.

Do young men generally know they need help before they receive it or ask for it?

Yes and no. One of my favourite quotes is, you’re a product of your environment until you have the resources to make your environment a product of you. I think if you’re in an environment where you’re role modelling things around you, you probably don’t know better. A lot of young people right now haven’t been taught how to tune into the self and their intuition to realise that they don’t want to be doing a lot of the things they’re doing.

And so, one of the big exercises we do in our workshops is a check in circle which is an opportunity for each boy to have two minutes uninterrupted, no questions, they just get two minutes to talk about how they’re feeling in their life. The biggest things that come out of that are that they get to talk about how they’re feeling and they get to hear how everyone else is feeling. The biggest reflections we get are it felt so good to get that off my chest. I’ve been carrying that for a long time and I didn’t realise how much I needed to say that. They get to hear other boys speak and they say, I didn’t know you were going through that, I’m going through the same thing. The other thing, which I think is the most powerful is, I had no idea that you had such a challenging home life. Now I understand why you come to school and you’re angry all the time. Before I just thought you were a dickhead, but now I see that you’re just someone having a challenging time and you’re coming to school and of course you’re angry.

You can’t force a plant to grow, but what you can do is affect the environment around the plant to make it grow. We can water it, we can make sure it has a wind-guard and bees. We don’t do anything to the individual plant. That’s our approach to young people.

Are your workshops met with much resistance from boys, and has this become more pronounced over the years?

It’s different for every group. Some don’t want a bar of talking about how they’re feeling, and that’s fair enough, they don’t feel comfortable to open up to a bunch of strangers after a few hours. People have complex trauma backgrounds, and it’s not always safe to open up to us in a workshop. We look at resistance as a need not being met.

Sometimes facilitators open up about their own experiences and showing the risks they’re willing to go to. Sometimes boys have been sitting down too long and need to go outside and play games to burn off energy. Sometimes things come across better when we play it as a clip from Michael Jordan. and then that’ll click for boys. The workshops are dynamic because every group is different and will be different every time.

We get resistance form teachers. People who have been in the education system for a long time and it feels too fast and too many things are changing at once. Old masculinity types feel that stuff shouldn’t be spoken about at school, and that it’s the parents’ responsibility. But if the school thinks the parents are talking about it, and the parents think the school is talking about it, no one is stalking about it. 90-98%of the time, the boys meet us with open arms.

What’s next for Man Cave?

We’re about to do our first digital campaign launch. Workshops are our big face to face offering, but as many companies and brands realised last year, we have to impact our audience even when we can’t be face to face with them. So we created a platform called Man Cave TV which is across YouTube, Instagram, TikTok, and Twitch.

We recently got some funding from Movember to really super charge Man Cave TV and they’re getting us to do a campaign for seven content creators. Teenage boys to come join the team who all create content from different areas. We’re looking for someone who’s a graphic designer, someone on TikTok, someone on Soundcloud, and a scriptwriter so were looking to create a platform that’s by the boys for the boys.

You can find more about The Man Cave on their site. To see Al Green and the interpersonal health panel discussion, book now.